UN special rapporteur Obokata said about 1 percent of Sri Lankan children are involved in some type of child labor, most of it considered hazardous.

Tomoyo Obokata, the UN special rapporteur on contemporary forms of slavery, said Friday at the end of a mission to Sri Lanka that he hopes to submit a report to the UN Human Rights Council in September next year.

“Girls and boys work in the domestic sector, in hospitality, cleaning in the general service industry. Others are sexually exploited in the tourism sector," he said.

Child labor is particularly severe in areas populated by ethnic minority Tamils, such as in tea and rubber planation regions where children are forced to drop out of school and support their families, he said.

“I witnessed that in Sri Lanka contemporary forms of slavery have an ethnic dimension," Obokata said. “In particular, Malayaha Tamils, who were brought from India to work in the plantation sector 200 years ago, continue to face multiple forms of discrimination based on their origin.”

Tamils are in poor conditions

He said the planation Tamils' inability to own land has forced them to live in “line houses” built during colonial times.

"I was frankly very much distressed by the way they are living. Five to 10 people stuffed in tiny spaces. No proper kitchen or toilet or shower facilities, just appalling conditions. I have recommended to the government to do something about this because frankly, I was distraught myself,” Obokata said.

Women and girls are disproportionately affected by contemporary forms of slavery, with females predominantly filling jobs in demanding sectors such as plantation, garment industry and domestic labor, he said.

“Similarly, increasingly high targets in the garment sector put continuous pressure on the female workers. As a consequence, some even choose not to go to the bathroom in order to meet the targets," he said.

In some cases, such as in the planation sector, older workers are compelled to regularly perform physically challenging work because younger people choose to be employed outside the sector. They have no access to adequate health care, social protection, or paid sick leave, he said. 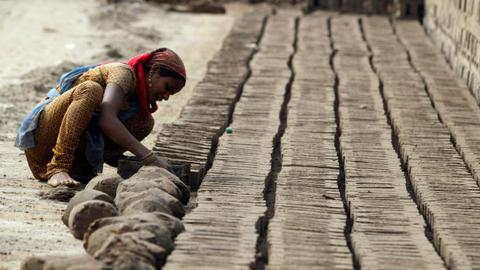