Italian Prime Minister Giorgia Meloni is starting a two-day visit to Algeria with a focus on increasing energy supplies from the north African nation.

Italian Premier Giorgia Meloni is looking to boost already strong energy ties with Algeria to further wean Italy off Russian energy, a focus of her two-day visit to the North African nation.

“We want Italy to become a European hub for Algerian gas. A junction for other EU countries,” Algeria’s ambassador to Rome, Abdelkrim Touahria, said in an interview with Rome daily Il Messaggero, published on Saturday ahead of Meloni's visit starting from Sunday.

Russia's offensive in Ukraine, which upset global strategic and economic dynamics, gave a new and urgent dimension to ties between Algiers and Rome, long dependent on Russian energy.

Other European Union nations also have scrambled to find sources of replacement for Russian energy.

Algeria has replaced Russia as Italy's No. 1 energy supplier, sending natural gas via the Trans-Mediterranean pipeline.

An initial deal last year concluded by Draghi added 9 billion cubic metres of gas by 2023-2024, Eni said at the time. Months later, in July, a $4 billion agreement between the companies Eni, the Italian energy company, Occidental and Total was concluded.

Meloni is expected to meet with Algerian President Abdelmadjid Tebboune as well as the nation's prime minister.

Eni CEO Claudio Descalzi is to be among those in the delegation.

“Today, we are the leading energy partner of Italy,” Touahria said. “But we aim to push beyond that.”

Touahria said that Italy’s Eni and the Algerian oil company Sonatrach are also looking together to the future with projects like oil and gas exploration in the south Sahara.

Besides energy, a raft of topics also will be discussed during Meloni’s visit, from naval construction to cars and startups.

Meloni's far-right-led coalition won a September national election, and it was likely that immigration and migrant issues, dear to the European far-right, would be on the agenda.

Italy is a magnet for migrants escaping poverty, war, and other woes in their home countries, and North Africans, often from Tunisia and Algeria, are among them.

Meloni and Tebboune met in November on the sidelines of a climate conference in Sharm El Sheikh, the Egyptian resort town.

READ MORE: Why Russia wants Türkiye to be a gas hub for Europe 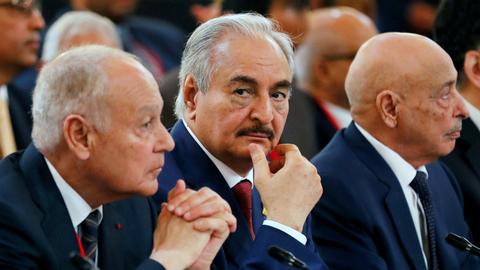