Hours after Prime Minister Serzh Sarksyan stormed out of talks with him, anti-government protest leader Nikol Pashinyan has been detained on Sunday. Armenian prosecutor said he was committing "socially dangerous acts."

Armenia's political turmoil deepened on Sunday with the detention of anti-government protest leader Nikol Pashinyan, shortly after Prime Minister Serzh Sarksyan stormed out of talks on the tenth day of mass rallies against his rule.

Pashinyan and two other opposition politicians "were detained as they were committing socially dangerous acts", the prosecutor general's office said in a statement.

Armenian police earlier denied opposition MP Sasun Mikaelyan's report that Pashinyan had been arrested and his whereabouts are unknown.

As a lawmaker, he is protected by parliamentary immunity and cannot be arrested without the approval of fellow MPs.

It came hours after Sarksyan stormed out of talks with Pashinyan on Sunday morning, accusing him of "blackmail."

The tense televised meeting in the capital Yerevan between the premier and Pashinyan lasted only a couple of minutes before the premier cut it short.

Opposition supporters denounce Serzh Sarksyan's efforts to remain in power as prime minister after a decade serving as president.

"I came here to discuss your resignation," Pashinyan, the leader of the opposition Civil Contract party, had told the prime minister in front of the cameras.

"This is not a dialogue, this is blackmail, I only can advise you to return to a legal framework. Otherwise you will bear the responsibility" for the consequences, replied Sarksyan, a former military officer.

"You don't understand the situation in Armenia. The power is now in people's hands," Pashinyan hit back.

Sarksyan said the Civil Contract party "can't speak on behalf of the people", having scored only eight percent in a recent parliamentary election, during the brief talks.

Pashinyan then vowed to "step up pressure" on Sarksyan to force him to resign and called on police officers to "lay down arms and join in the protests."

Hundreds of people were detained at protest rallies held across Yerevan during the day, police said in a statement, and seven protesters have sought medical help, according to Armenia's health ministry.

Armenia's interior ministry said it took the decision to "disperse demonstrators, including those assembled in Yerevan's Republic Square."

"In order to perform these duties, police are entitled to carry out arrests and use force. We urge protesters to comply with these and other lawful demands of policemen," the statement said.

But tens of thousands of protesters defied the police warning and in the evening filled central Yerevan's Republic Square.

"By beating up people, the authorities simply can't change the situation in their favour. Too many people don't trust Sarksyan. The genie is out of the bottle," a 32-year-old protester, Sona Petrosyan said..

Another young protester who didn't give his name said: "We will gather here every day and hold peaceful rallies until Serzh Sarksyan resigns."

The US embassy in Yerevan urged "the government to show restraint to allow for peaceful protest and… those exercising their freedom of assembly to do so responsibly, to avoid violence, and to prevent an escalation of tensions".

"A peaceful resolution requires meaningful political dialogue in good faith," the embassy said in a statement.

The European Union delegation to Armenia issued a statement expressing "concern" over the rapidly unfolding crisis.

"The European Union reiterates that it is crucial that all parties show restraint and responsibility and urgently seek a negotiated solution," the statement said.

Opposition supporters have criticised the 63-year-old leader over poverty, corruption and the influence of powerful oligarchs.

Pashinyan had earlier announced the "start of a peaceful velvet revolution" in the landlocked South Caucasus nation of 2.9 million people.

He called for a nationwide campaign of "civil disobedience", urging civil servants "to stop obeying Sarksyan."

Constitutional amendments approved in 2015 have transferred power from the presidency to the premiership.

After Sarksyan was first elected in 2008, 10 people died and hundreds were injured in post-election clashes between police and supporters of the defeated opposition candidate. 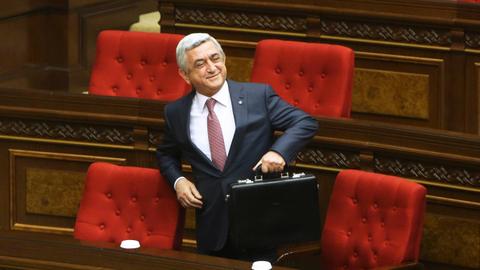