Bulgaria's Radev announces fifth general election to be held on April 2 after Socialists became the third political party to refuse to form a regular government in deadlocked parliament.

Bulgarian President Rumen Radev has said he would set April 2 as the date for the country's fifth parliamentary election within two years after inconclusive October polls failed to produce a working government.

Radev told journalists on Tuesday that he has to dissolve the parliament after the Socialists became the third political party to refuse to form a regular government in a deadlocked parliament.

"I will issue a decree to dissolve parliament on February 3 and I set parliamentary elections for April 2," Radev told journalists.

"I hope that lawmakers will use the time to prove that fight against corruption... and the European integration are a genuine priority and not just an election pledge," he said.

Bulgaria, the European Union's economically-weakest member, has been rocked by political instability since anti-graft protests in 2020.

It has been governed by caretaker governments, appointed by Radev for much of the past two years in the absence of a stable elected coalition.

Radev has said earlier he would re-appoint current interim prime minister Galab Donev to lead the country until a new government is formed after the snap polls.

The last election in October produced a deeply fragmented parliament in the EU's poorest country.

The two biggest parties -the conservative GERB and the anti-graft We Continue the Change (PP)- failed to garner enough support to form a working cabinet.

Radev then asked the Socialists, the party of his choice, to form a government.

But their bid also ended in failure on Tuesday.

"The difficult political situation did not produce a solution again and we are heading for the next early parliamentary election," Radev said.

The political hiatus is unprecedented in Bulgaria since the end of communism in 1989.

The prolonged political turmoil is weighing on Bulgaria's plans to join the euro zone in 2024.

The political crisis is likely to delay much needed reforms to combat high-level graft and hamper Bulgaria's ability to use efficiently EU funds. 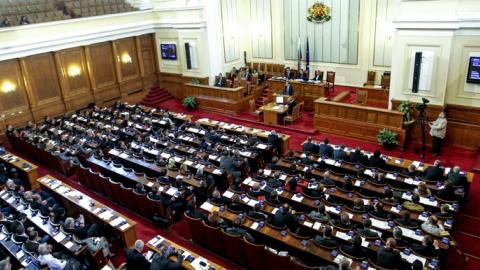