Bird flu of the type H5N8 was also found on a poultry farm in northern Germany, the state's agriculture ministry said, after it had already spread among the wild bird population in the region.

The Dutch Ministry of Agriculture has ordered the culling of 200,000 chickens after highly pathogenic bird flu was found at a farm in the eastern town of Puiflijk.

The cull, which includes birds at a second farm within a 1-kilometre radius, is the second in the country within a month after the H5N8 disease was first found in wild fowl.

Bird flu of the type H5N8 was also found on a poultry farm in the northern German state of Schleswig-Holstein, the state's agriculture ministry said on Thursday, after it has already spread among the wild bird population in the region.

Eight chickens died within a short time on a farm in the state, the ministry said, adding that the rest of the poultry on the farm had been culled and disposed of professionally.

Earlier this year, a case of H5N8 bird flu was confirmed in a poultry farm in the northern state of Lower Saxony.

Risk to humans from the disease is considered low, but the World Health Organization says it has been spreading among migratory birds that then transmit it to domestic poultry.

Britain on Monday ordered a cull of 13,000 birds at a farm in Frodsham, Cheshire, after detecting cases there.

Dutch poultry farmers have been ordered to keep birds inside until further notice to prevent transmission.

The farm at the centre of Thursday's cull in Puiflijk is within 3 kilometres of the first case, 30 kilometres from the German border near Nijmegen.

Other farms nearby are being tested for the disease, while transportation of birds is banned in a 10 kilometres radius.

Poultry is a $1.9 billion (1.6 billion euro) industry in the Netherlands, Europe's largest exporter of chicken meat and eggs, employing 10,000 people on 2,000 farms. 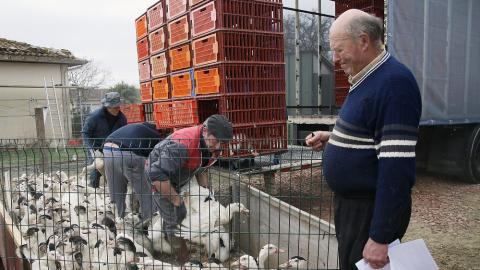