As Bosnia marks the 24th anniversary of the gut-wrenching massacre, here's a quick recap on how the Bosnian Serb forces took Dutch peacekeeping forces hostage in July 1995 and killed more than 8,000 people over the following days.

In 1992, tens of thousands of Bosnian Muslims took refuge in Srebrenica in an attempt to flee the Serbian army’s offensive in north-eastern Bosnia. The refugees were under the protection of Dutch infantry forces. In April that year, Serb forces, with the assistance of the Yugoslav Army and paramilitary groups from Serbia lay siege to the town for the next three years. A Human Rights Watch (HRW) report said the siege marked the beginning of an “ethnic cleansing campaign” as it left the overcrowded town without enough basic needs, including food and medicine.

In July 1995, the Serb army invaded the town. Over the course of five days, they killed more than 8,000 Bosnian Muslims, or Bosniaks, mostly men and teenage boys, after taking them to detention centres, abusing and torturing them. More than 1,000 are still thought to be missing from the massacre.

Men were separated from women and sent to the warehouses. Women and children were put in buses en route to Tuzla city, a Muslim safezone in northeastern Bosnia, outside the Serb-controlled territory.

Reports suggest that some of the women were forcibly taken off the buses, never to be seen again. Between 1992 and 1995, at least 296 villages were wiped off the map, according to the Bosnian Institute of the United Kingdom.

The genocide became one of the worst humanitarian disasters since the Second World War.

On July 11 this year, Bosnia marked the 24th anniversary of the 1995 Srebrenica massacre, by burying 33 newly-identified victims in a collective funeral.

Rape was used as a war weapon against Bosniak women. The assaults were often carried out  in the presence of others. According to the International Criminal Tribunal for the former Yugoslavia (ICTY), the war-time "systematic rape" and "sexual enslavement" was a crime against humanity.

The Bosnian Interior Ministry estimates 50,000 women were raped in the country during the three years of war and some were executed after they were attacked.

Some estimates say that 4,000 women conceived children as result of rape. The Children of War Foundation is advocating for the children of victims of rape to be given legal recognition today. With no birth certificates, the children of the survivors have no access to certain rights, such as opening a bank account.

“Let me start with the deniers, with revisionists. The denial or distortion of history is an intentional assault on truth. Understanding the past is crucial to how people understand themselves, the society and how to achieve the common goals” Judge Carmel Agius, the President of the ICTY said in a speech.

Gen Ratko Mladic, the leader of the Bosnian Serb force was  convicted of genocide and crimes against humanity in 2017, 22 years after the massacre. He appealed the judgment in 2018.

Former Bosnian Serb leader Radovan Karadzic was also pronounced guilty of the genocide and sentenced to life imprisonment by the UN court in The Hague in March 2019.

Srebrenica was placed under United Nations protection in 1993. It meant the UN peacekeeping mission was responsible for keeping the civilians out of harm and in the ‘safe areas’.

However, the UN peacekeeping officials were unwilling to heed requests for support from their own forces stationed within the enclave, according to a report by HRW. The Dutch commander also reached out to the UN, seeking its support.

As a result, Serbs first attacked Dutch soldiers and took 30 of them hostage, leading to the fall of Srebrenica. The gruesome bloodletting followed immediately after.

The organisation is widely condemned for allowing Bosnian Serb forces to carry out systematic killings. 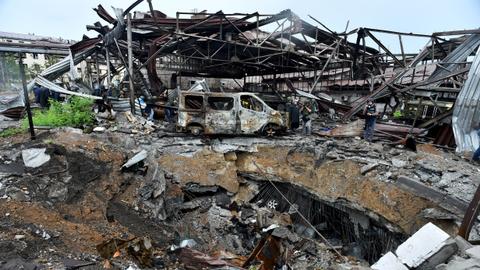