1
Türkiye’s concerns 'all legitimate and must be addressed': NATO chief
2
Türkiye seeks Iran nuclear deal revival, objects to 'one-sided sanctions'
3
NATO to massively increase number of forces at high readiness
4
G7 leaders vow to stand with Ukraine 'for as long as it takes'

A Turkish photojournalist was hit by a tear gas canister in Paris amid violent crackdown on protests.

An Anadolu Agency correspondent on Thursday was wounded during clashes between French police and demonstrators, who are protesting President Emmanuel Macron's controversial pension reform plans.

Mustafa Yalcin was injured in the eye when a gas canister used by the security forces hit him in the face breaking his mask. He was rushed to a nearby hospital.

Protesters set fire to a cafe, traffic lights and electric motorcycles in Paris.

According to the workers' unions, the strike will continue until Monday, with local media reporting that a total of 70 people have been arrested so far.

The law and order situation has resulted in the cancellation of 20 percent of flights to the country.

In a tweet, the Paris Police Department said it had conducted 6,476 checks and arrested 65 people.

The Gare du Nord, a station of the SNCF railway network in Paris, was almost empty in the morning, according to France 24 broadcaster.

Protesters, however, started to come at the Gare du Nord in the afternoon to attend the main march to Place de la Nation square.

French police hit Turkish photo journalist Mustafa Yalcin in the eye with a gas canister during protests in Paris tonight. He is likely to lose an eye.

French Police violence in a year:

The "unlimited" strike impacted all public transport systems in the country, according to local media reports.

Some trains have been cancelled, while others have been operating at drastically reduced shifts.

Commuters preferred bikes or electric scooters to go to work or stayed at home.

The strike could last for days and the outcome of it is still uncertain but it aims to halt the reform.

The walkout came after the government announced its determination to implement pension reform despite the nationwide outcry.

According to France’s National Institute of Statistics and Economic Studies, Macron has further fuelled the "sense of anger and rebellion" among French people against their president, with his economic policies that have given wealthy people a greater share of national income since his inauguration on May 17, 2017.

Macron has been facing the biggest crisis since the beginning of Yellow Vest protests in October last year.

France currently has 42 different pension programs for different sectors but the government proposed to unify those systems into one pension scheme.

France’s current program is based on the principle of solidarity between generations under which working population finance the pensioners of that year.

However, due to the ageing population, fewer people are paying into the current system.

To fix this, the government introduced a point-based system that would compensate the workers with pension points for every day they work or every euro they contribute.

The reform would lift the privileges granted to civil servants and gradually increase the retirement age from 62 to 64, a move expected to adversely affect many sectors.

The workers will get a full pension if they retire at the age of 64. If they retired before, they would lose 5 percent of their pensions for every year they retire early.

They would also gain a 5 percent increase in their pensions for every year, if they retire after the age of 64.

Demonstrations and strikes have been supported by numerous labour and police unions, as well as Yellow Vests.

Macron paused his overseas visits for a while to focus on solving problems caused by strikes and demonstrations. 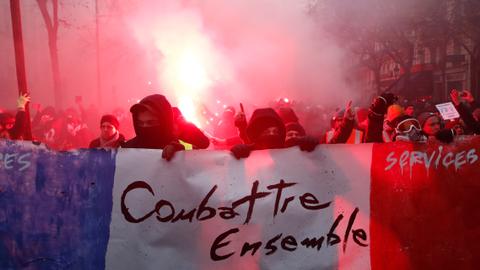 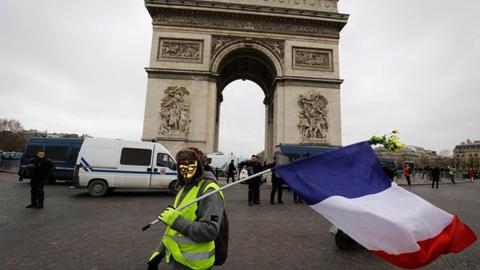 1
Türkiye’s concerns 'all legitimate and must be addressed': NATO chief
2
Türkiye seeks Iran nuclear deal revival, objects to 'one-sided sanctions'
3
NATO to massively increase number of forces at high readiness
4
G7 leaders vow to stand with Ukraine 'for as long as it takes'