Saakashvili was convicted in absentia on the abuse of office charges in 2018 and sentenced to six years in prison. He denies any wrongdoing and says the case is politically motivated.

Former president Mikheil Saakashvili has been arrested after returning to Georgia, the government said, a move that came as the ex-leader sought to rally supporters ahead of national municipal elections seen as critical for the country's political makeup.

Saakashvili, a flamboyant pro-Western reformer who left the Caucasus country after his second term as president ended in 2013, announced his return in video messages on Friday, a day before closely watched local elections.

His opponents in the ruling Georgian Dream party had warned Saakashvili would be arrested on a 2018 abuse of office conviction if he returned, and Prime Minister Irakli Gariba shvili said he had quickly been detained.

"Georgia's third president Mikheil Saakashvili has been arrested today and sent to jail," Garibashvili told a news conference in the capital Tbilisi on Friday.

The 53-year-old's arrest will almost certainly spark upheaval in Georgia, a small former Soviet republic in the Caucasus that has been plagued for years by political instability.

In a video posted on social media on Friday morning, Saakashvili said he was in the western city of Batumi and had returned to Georgia from Ukraine to ensure the fairness of Saturday's polls.

"I risked my life and freedom to be back," Saakashvili said.

"I call on everyone to go to the elections and vote for the United National Movement," he said, referring to Georgia's main opposition party which he founded.

The municipal elections are a key test for Georgian Dream and are being watched both inside and outside Georgia for signs of the country backsliding on democracy.

Saakashvili – who swept to power in 2004 following a peaceful uprising and still commands a fiercely loyal following – called on his supporters to gather on the main thoroughfare in the capital Tbilisi on Sunday.

"If the usurper government manages to detain me prior to this, it must only strengthen us," he said.

Saakashvili was convicted in absentia on the abuse of office charges in 2018 and sentenced to six years in prison. He denies any wrongdoing and says the case is politically motivated.

Officials said earlier Friday there was no record of Saakashvili crossing Georgia's borders and Georgian Dream said he was lying about being in the country.

But Garibashvili told reporters that law enforcement agencies had tracked Saakashvili's movements from Ukraine to Georgia and "chosen a time and place for the police operation that would create minimal obstacles for the arrest."

Saakashvili has been living in Ukraine, where he heads a government agency steering reforms.

He announced his planned return to Georgia earlier this week, saying he would be flying to Tbilisi on Saturday evening and posting a copy of his ticket.

Garibashvili said at the time that "if Saakashvili sets foot on Georgian soil, he will be immediately arrested and brought to prison."

Founded by powerful billionaire Bidzina Ivanishvili, Georgian Dream has been the ruling party since 2012.

Critics have accused the party of using criminal prosecutions to punish political opponents and journalists. Interpol turned down requests from Tbilisi to issue a red notice against Saakashvili.

Georgian Dream narrowly won parliamentary elections last year but the opposition, led by Saakashvili's UNM, denounced the vote as rigged and refused to take up their seats.

The European Union mediated an agreement to end the crisis, under which Georgian Dream pledged to hold a snap parliamentary vote if it wins less than 43 percent in Saturday's local elections.

The ruling party unilaterally withdrew from the agreement in July, sparking harsh criticism from the European Union and the United States.

With concerns mounting in the West over the ruling party's democratic credentials, the United States has hinted at possible sanctions against Georgian Dream officials. 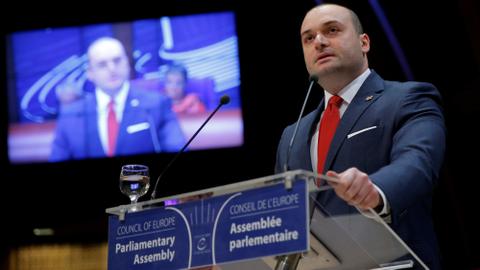