Panos Kammenos, leader of the Independent Greeks party, says he won’t offer his backing for a deal between Greece and its northern neighbour to change the country’s name to North Macedonia.

The leader of a small right-wing party threatened on Monday to pull it out of Greece's governing coalition if a deal settling a row over Macedonia's name comes to parliament, increasing uncertainty in a country that just emerged from bailouts.

Leftist Prime Minister Alexis Tsipras and Panos Kammenos, leader of the Independent Greeks party, joined forces in 2015 with the stated aim of pulling Greece out of its then-debt crisis and fight corruption that flourished under socialist and conservative rule and pushed Greece to the verge of bankruptcy.

"I won't vote for this deal if it comes to parliament," Kammenos, who is defence minister, told state TV ERT after a trip to the United States, where he presented his party's stance and what he called an alternative scenario, if the deal fails.

"If the parliamentary majority decides a divorce, so be it, there will be one," he said, adding that his personal relationship with Tsipras remained "harmonious."

Greek nationalists have opposed the name deal, contending that Macedonia is historically Greek and part of Greek heritage.

Greece maintained for 27 years that Macedonia's name implied territorial claims to its northern province of the same name, and so blocked Skopje's path to European Union and NATO membership. The June deal approved by Tsipras removed that obstacle, and has been embraced by both NATO and the EU.

But the deal has been thrown into doubt by the failure of a Macedonian referendum to achieve the minimum turnout needed to uphold the accord. In that light, Kammenos said, the deal is unlikely to come before the Greek parliament for approval.

But in an effort to ease fears of a government collapse if the Macedonia deal comes to the Greek parliament for a vote, government officials have said that support from independent and centre-left lawmakers has already been secured.

But Kammenos's comments triggered heated debate, even within Tsipras' leftist Syriza party. During a weekend meeting of its central committee, members said the partnership was unravelling.

"It's a big political issue when a government partner says he disagrees to the point of being forced to withdraw his confidence in the government," senior Syriza official Panos Skourletis said on Monday.

"This is a big political mistake on his (Kammenos) part." 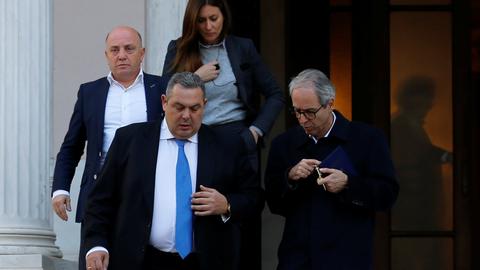