Greek protesters in Athens clashed with police who fired tear gas during a strike against voting for further creditor-demanded measures which included family benefits, union strikes and property foreclosures.

Greece's parliament approved a bill for fiscal, energy and labour reforms prescribed by the country's international lenders in exchange for fresh bailout funds.

The draft legislation was approved by a majority of lawmakers in the 300-seat parliament.

Earlier in the day, a general strike crippled public transport in the city and hit air traffic ahead of the parliamentary vote.

Apart from introducing much larger quorums on unions to call a strike, the 100-odd reforms also provide for the foreclosure and online auction of properties belonging to bad debt holders. Both are fiercely opposed by leftists and trade unions.

The third rescue programme, currently financially supported by EU states but not the International Monetary Fund, runs to August 2018 and Athens then hopes to fully return to market financing.

Monday's strike, called by a slew of unions, caused havoc in Athens, with the shutdown of public transport leading to huge traffic jams.

State employees have also been asked to strike by their powerful union Adedy while air traffic controllers were set to stop work in the afternoon, potentially disrupting flights.

Greece has seen around 50 massive strikes since 2010 following austerity measures imposed by creditors in return for multi-billion-euro bailouts orchestrated by the European Union, International Monetary Fund and European Central Bank.

After Monday's vote in parliament, Athens will wait for European finance ministers to approve the latest tranche of a third bailout programme totalling $5.5 billion (4.5 billion euros). 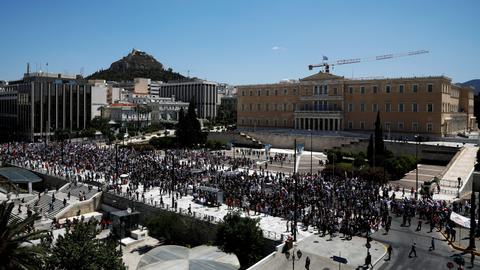