Public sector workers went on strike across France on Thursday in a "warning shot" for President Emmanuel Macron against his multifront reform drive, with cancelled trains and flights causing travel headaches for thousands.

Many schools, daycare centres and libraries were closed ahead of demonstrations planned for the afternoon, while other public services such as garbage collection were disrupted in Paris and other cities.

Public servants want better wages and are protesting against the planned loss of 120,000 jobs by 2022.

The walkouts and demonstrations are the latest test of strength for 40-year-old centrist Macron as he pushes ahead with a new phase of his agenda to overhaul state rail operator SNCF and other public services.

According to airport authorities, 30 percent of flights to and from Paris were cancelled.

"Because of the railway workers' strike, we are stranded here, and we will board our flight 13 hours later. We are stuck here, with a delay of 13 hours," said Guy Hourtic, a plane passenger.

"For me, I can't go on strike. I understand that they're (Air France workers) going on strike, but at least (find a way) to not compromise our activities, because we too, have jobs," said Wahida, another plane passenger.

SNCF said 40 percent of high-speed trains and half of regional trains were running.

Julien Cabanne, a Regional Secretary of CGT trade Union for Cheminots-Auvergne said that if the protesters "are not heard, the movement will likely harden in the sense that there would be calls for strikes and in that case, very few trains would run."

The Paris Metro was running normally on Thursday.

Some schools and children's nurseries were closed.

More than 140 protests are planned across France, the biggest culminating at the Bastille monument in Paris where unions expect 25,000 demonstrators.

March 22 was chosen deliberately to echo the start of nationwide protests in 1968 that led to France's biggest-ever strike and notorious street battles between police and students in Paris in May of that year.

Some commentators have reached into the past to draw parallels with more recent confrontations, particularly to 1995 when weeks of strikes paralysed France and forced the government to abandon pension reforms.

For France's trade unions, it is a chance to show that they still wield power despite decades of declining membership and new laws that have clipped their ability to shut down public services. 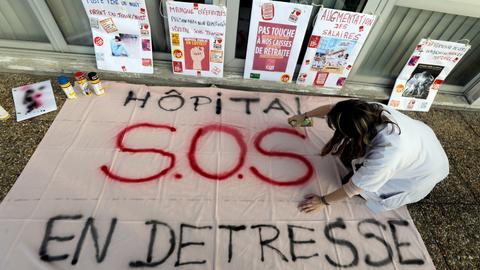