The bird flu outbreak has been spreading in Europe in recent weeks, with hundreds of thousands of ducks, geese, chickens and turkeys slaughtered.

French producers of foie gras have called for a mass preventive cull of ducks to try to halt the spread of a severe strain of bird flu that is ripping through poultry farms in the southwest of the country.

The highly pathogenic H5N8 virus was first detected in a bird in a pet shop on the Mediterranean island of Corsica in November before spreading to duck farms on the mainland in December.

Several European countries have reported cases of infection, five years after a major outbreak prompted the slaughter of millions of ducks in France.

"The virus is stronger than us. New clusters are constantly emerging," the head of France's CIFOQ federation of foie gras producers, Marie-Pierre Pe, told AFP.

France's agriculture minister warned on Friday that "hundreds of thousands" of ducks would still have to be culled to halt a severe strain of bird flu devastating flocks in southwest France.

"There will be hundreds of thousands more; that's certain," Julien Denormandie told France Bleu Gascogne radio ahead of a visit to farms hit by the outbreak, calling it "a race against the clock" against the "highly pathogenic" H5N8 virus.

"It's a drastic move," Denormandie said, adding, "It's clear that we didn't act fast enough."

He acknowledged that he did not know how many ducks would remain among the five million currently being produced in the Landes, but promised that compensation based on their market value would begin to arrive next week.

READ MORE: How dangerous is India's bird flu amid the pandemic?

'Situation is out of control'

Officials in Belgium said on Thursday they had culled three contaminated poultry flocks — one in Menin, in the west of the country, another in Dinant in the south and a third in Dixmude in western Flanders.

Belgium's federal food safety agency AFSCA, which has ordered poultry owners to lock up their animals to avoid contamination, said that 20 cases of the virus had been found in wild birds.

Herve Dupouy, a French producer who heads the local poultry section of the FNSEA farmers federation in the Landes department, a bastion of the foie gras industry, said "the situation is out of control."

He called on the state to cull all poultry flocks in the area and impose a two-month production freeze.

"There's no other solution," he said.

So far the authorities have been culling all ducks and geese within a three-km radius of an infected flock. Free-range chickens and turkeys within that range have also been slaughtered.

CIFOQ said on Thursday that government officials had shared plans to expand the culls over a wider area.

The bird flu clusters have been detected on poultry farms and in pet shops in the Landes department and the neighbouring Gers and Pyrenees-Atlantique departments.

Lithuania has reported an outbreak of the highly pathogenic H5N8 bird flu virus among backyard poultry, the World Organisation for Animal Health (OIE) said on Friday.

The outbreak, which occurred in the town of Kaunas, killed 22 poultry in the yard, with the remaining five culled, the Paris-based OIE said, citing a report from Lithuania's agriculture ministry.

The head of France's chamber of agriculture, Sebastien Windsor, called on Wednesday for "radical measures" to try to restore confidence in export markets such as China, which announced this week it was suspending French poultry imports over the virus.

Producers of foie gras, a pate made from the livers of force-fed ducks or geese, fear a repeat of the devastation wrought by two previous waves of bird flu in the winters of 2015/2016 and 2016/2017.

Over 25 million ducks were culled in the first outbreak, followed by 4.5 million the following year, causing a steep decline in foie gras production.

Besides France and Belgium, the Netherlands, Sweden, Britain and Ireland have also reported bird flu outbreaks since the winter began.

Dutch authorities culled some 190,000 chickens in November over the discovery of the virus at two farms. 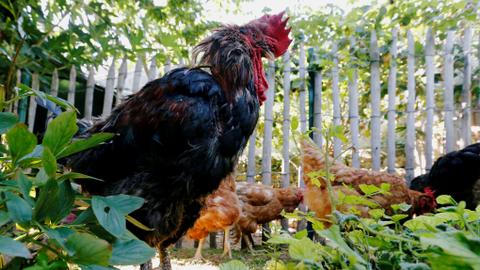 Maurice the rooster scores victory in battle for France's soul 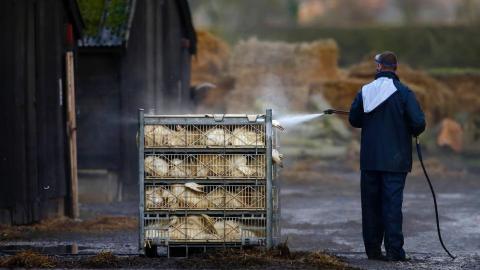