Weeks of tensions over the government's handling of the Covid-19 crisis came to a head with a late-night vote of confidence in the upper chamber that Conte won by 156 votes to 140, after almost all Italia Viva's senators abstained.

Italian Prime Minister Giuseppe Conte has survived a vote of confidence but failed to secure an overall majority in parliament, leaving his ruling coalition severely weakened as it battles the coronavirus pandemic.

The government has been teetering near collapse since former premier Matteo Renzi withdrew his Italia Viva party last week, depriving Conte of his majority in the Senate.

Weeks of tensions over the government's handling of the Covid-19 crisis came to a head with a late-night vote of confidence in the upper chamber on Tuesday.

Conte won by 156 votes to 140, but only after almost all Italia Viva's senators abstained – and crucially, the result fell short of the 161 needed for an overall majority.

"Italy doesn't have a moment to lose," tweeted Conte after the vote. "Right back to work to overcome the health emergency and the economic crisis."

The government, comprised mainly of the former anti-establishment Five Star Movement (M5S) and the centre-left Democratic Party (PD), now limps on but without a strong mandate to govern at a crucial time.

Italy is facing an unprecedented crisis as a result of the Covid-19 pandemic, which has claimed more than 83,000 lives and devastated the economy.

Conte will likely seek to win over opposition lawmakers to bolster his position in the coming days and weeks, as he seeks to push through notably a 220-billion-euro ($267 billion) spending plan for European Union recovery funds.

Still, "it remains unclear how such a weak and unwieldy coalition... without a majority can lead Italy out of the deepest economic crisis since World War II amid a pandemic," noted Wolfango Piccoli of the Teneo political consultancy.

READ MORE: Italexit: Can the party cut Italy out of the EU?

Conte has over the past two days appealed to both the Senate and the lower Chamber of Deputies to support him, both to guide Italy out of the crisis and keep the right-wing opposition out of power.

Two senators from Forza Italia surprised commentators by backing Conte in the vote of confidence, and were promptly expelled from their party.

Conte, a formerly obscure law professor who has never himself been elected, led an unashamedly populist government involving the League and the M5S before Salvini quit in August 2019.

But this week the premier appealed for support from lawmakers from "the highest European tradition -- liberal, popular and socialist".

After the vote result was called Tuesday, Salvini tweeted that it was a "sad moment in history".

"This is a government that does not have the numbers in the Senate, so how can it pull Italy out of the crisis?"

READ MORE: European Union agrees how to bail out Italy and Spain. Well, sort of.

Italy was the first European country to face the full force of the pandemic early in 2020 and remains one of the continent's hardest-hit countries.

It has been allocated a large share of a 750 billion euro European Union rescue fund, but Conte's 220 billion euro spending plan was a trigger for the current turmoil.

For weeks, Renzi had criticised Conte for his leadership style and his handling of the pandemic, and warned that he and M5S risked squandering the EU billions.

He told the Senate Tuesday it was "now or never" to change course, warning that Italy risked squandering its best opportunity since the US Marshall Plan that rebuilt post-WWII Europe.

"The future is in play now, not in six months!" Renzi declared.

But critics accuse Renzi -- whose party is polling at just three percent -- of seeking to deliberately destabilise the government so he can play kingmaker. 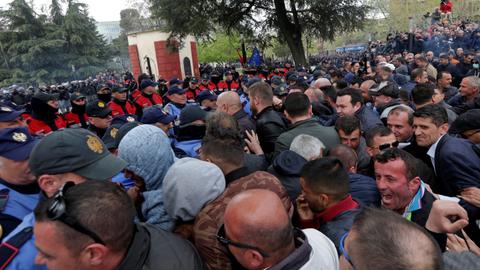