European Commission chief Jean-Claude Juncker say he welcomes a deal to form a governing coalition in Germany, saying the agreement is a huge benefit for Europe.

European Commission chief Jean-Claude Juncker on Friday hailed as "positive" plans for the EU in a deal that brings German Chancellor Angela Merkel a step closer to forming a coalition government.

Juncker told a press conference in Bulgaria that the portion on the EU's future in the German accord between Merkel's CDU/CSU and the SPD was a "very significant positive, constructive, forward-looking, purposeful contribution."

"I read the European policy part of the exploratory agreements in a nutshell this morning and I am very satisfied with the content of what the CDU/CSU and the SPD have agreed on a common policy for the future," Juncker said.

Merkel said earlier her Christian Democrats and her Bavarian allies the CSU had reached a breakthrough deal on Friday with Germany's second biggest party, the Social Democrats.

She said the agreement reached after 24 hours of talks would give Europe a "fresh start."

Bulgarian Prime Minister Boyko Borisov, whose country has just taken over the EU's six-month rotating presidency, urged Berlin to reach a final deal as soon as possible so the bloc could get on with important reforms.

"Hopefully white smoke will come from Germany so it can participate fully in European affairs. Germany is one of the pillars of Europe," Borisov told the press conference alongside Juncker.

"All those topics that we raised depend on cooperation by Chancellor Merkel, on her support in solving the issues. So we are waiting for this quite impatiently."

If the finishing touches come together on the grand coalition of Christian Democrats and Socialists, it will finally allow Chancellor Angela Merkel and French President Emmanuel Macron to co-operate without the immediate impediment of domestic politics.

Bulgaria, which wants to adopt the euro currency, has made genuine progress in bringing its economy closer to those of euro zone countries but has still some work to do, Junker said.

Jean-Claude Juncker praised Bulgaria’s strong public finances and said all countries that meet the criteria should be able to adopt the euro.

“I did not say that Bulgaria will be automatically the next member of the euro zone, but it is heading in the right direction because ... unemployment is falling, the budgetary situation in strong, so when it comes to genuine convergence, Bulgaria has achieved progress,” Juncker said.

“It is not quite enough yet and our Bulgarian friends are aware of this, but when it comes to real convergence there has been genuine progress,” he said.

Bulgarian officials said on Thursday they wanted to file a formal application in the middle of this year to lock their currency in the Exchange Rate Mechanism 2 (ERM-2) – a two-year stability test for national currencies before joining the euro.

“I am sure that Bulgaria will, or should join the ERM-2 as rapidly as possible,” Juncker said.

Leaders also signed the largest project within the Juncker plan for Bulgaria worth 100 million euros.

The project will create 210 jobs and will support the development of Bulgarian agriculture.

It is funded by the European Investment Bank within the framework of the European investment plan, and it is in addition to the mobilisation of $310 billion (256.1 billion euros) in different European projects helping create more that 300,000 jobs.

Former Soviet bloc Bulgaria joined the EU in 2007 and took over its rotating six-month presidency at the start of January.

Bulgaria said on Friday it wants to use its EU presidency to improve the bloc's relations with Turkey "without hiding the problems", after ties soured over Ankara's crackdown following an attempted coup.

Bulgaria stressed the need to preserve the EU's deal with Ankara to curb record flows of asylum seekers, some of whom cross the Turkish-Bulgarian border.

"We believe Turkey is an important partner of Europe on many issues like refugees, terrorism, economy, energy. We should try to improve the relationship with them without hiding the problems," Bulgarian Foreign Minister Ekaterina Zaharieva said on Friday.

"It is better to talk honestly – (whether it is) realistic for Turkey to be a member of the EU or if it is not, what kind of relationship we should have with them."

Bulgaria has a 260-km border with Turkey and is home to a 700,000-strong Turkish minority.

Bulgaria defended a promotional video launching its EU presidency, which has elicited furious calls that it be withdrawn in the wake of the Harvey Weinstein sexual assault scandal.

Titled You can't help falling in love with her at first sight the four-minute PR film tells the story of a chance encounter on train between a handsome young foreigner and a Bulgarian woman.

"Bulgaria: when you first meet her, you might get the wrong message," the voice-over says as the pair get acquainted and proceed to a breathless tour of Bulgarian landscapes.

"Remember here a 'no' might mean 'yes.' Not that she is trying to confuse you, she is inviting you to get to know her yourself," it says.

You can't help falling in love with her at first sight!

This is the official video presenting #Bulgaria during #EU2018BG! Follow the steps of the couple portrayed by young actors @LorinaKamburova and @Boyko_K_K and discover the beauty of the country! https://t.co/GRT97QXUv7

The video is referring to the west Balkan custom of shaking the head in a way that most of the world would interpret as a no, but in Bulgaria actually means yes.

The local quirk is a guidebook staple, but takes a darker turn in the context of the Harvey Weinstein scandal that has made headlines around the world.

"We regret to hear that there has been some misunderstanding about the video," the Bulgarian presidency said on its Twitter account.

"It clearly refers to the Bulgarian habit of head-shaking in agreement," it said. 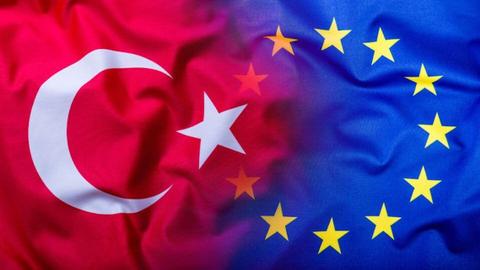