Macron and Le Pen trade blows ahead of French election

The bitterly contested presidential election has polarised France, one of the world's largest economies and a key member of the NATO defence alliance.

France's centrist presidential frontrunner Emmanuel Macron and his far-right rival Marine Le Pen traded campaign blows on May Day, a week before they face off in the country's presidential election.

Macron, once struck off as a fringe candidate during the early stages of campaigning, is now the pollsters favourite to take over the French presidency, having polled the highest number of votes in the first round of the election last week.

While Macron offers France a choice between his vision of closer integration with a modernised European Union, Le Pen calls to cut immigration and take the country out of the EU.

Speaking during a tribute ceremony for a young Moroccan man who drowned in the River Seine in Paris 22 years ago after being pushed into the water by FN supporters on the fringes of a May Day rally, Macron accused Le Pen of being an extremist.

"I will fight up until the very last second not only against her programme but also her idea of what constitutes democracy and the French Republic," said Macron.

Le Pen in turn portrayed Macron as a clone of unpopular outgoing Socialist President Francois Hollande, under whom he served as economy minister from 2014 to 2016.

"Emmanuel Macron is just Francois Hollande who wants to stay and who is hanging on to power like a barnacle," Le Pen told supporters in Villepinte, a suburb north of Paris.

Since taking over the party from her father Jean-Marie, Marine Le Pen has worked hard to cleanse it of xenophobic and anti-Semitic associations and make it more appealing to a wider electorate.

Although Macron and Le Pen qualified for the second round of voting at the best performing candidates from the first round, they only gathered 45 percent of votes between them.

The second round will take place in the middle of a weekend extended by a public holiday. That has fed speculation that a high abstention rate could favour Le Pen, whose supporters typically tell pollsters they are staunchly committed to their candidate. 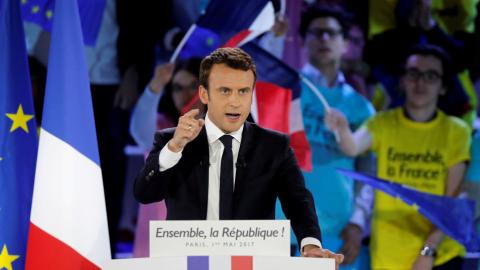