Avignon prosecutor says the assailant was a 33-year-old born in France “who had nothing to do with the Muslim religion” and appeared to be “psychologically unstable”.

A man shot and killed by police in the French city of Avignon claimed allegiance to an anti-immigrant group and had assaulted a merchant of North African descent, authorities have said.

The incident in Avignon on Thursday followed gruesome knife attack by a man in the southern city of Nice. At least three people died in the stabbings, that took place at church, prompting fears of copycat attacks.

The man in Avignon had a firearm and was shot and killed by police after he refused to drop his weapon and a warning shot failed to stop him, according to a national police official. French media was quick to report that he has been shouting "Allahu Akbar" or God is great but officials later clarified he was not affiliated with Islam but a far-right group instead.

One official said the man claimed to belong to extreme-right group Generation Identity and had assaulted a local merchant.

Avignon Prosecutor Philippe Guemas told broadcaster France Bleu that the assailant was a 33-year-old born in France “who had nothing to do with the Muslim religion” and appeared to be “psychologically unstable”.

Another suspect was apprehended in Lyon the same day, carrying a long knife near a subway station.

France raised its threat alert to "emergency" levels shortly after. President Emmanuel Macron said he would immediately increase the number of soldiers deployed to protect schools and religious sites from around 3,000 to 7,000.

The attack in Nice

The attacker was a young Tunisian man armed with a 17-centimetre blade and carrying a copy of the Quran. Two telephones were among the things found on the attacker. Also found a was bag with the attacker's personal affairs containing another two unused knives.

Thursday's attacker was seriously wounded by police and hospitalised in life-threatening condition. Nice's Notre Dame Basilica is located less than a kilometre from the site where another attacker ploughed a truck into a crowd on France's national day in 2016, killing dozens.

The attack in Mediterranean city of Nice was the third in less than two months that French authorities have attributed to Muslim extremists, including the beheading of a teacher who had shown caricatures of Prophet Muhammad in class after the images were re-published by a satirical newspaper targeted in a 2015 attack.

Muslims object to the cartoons on the basis that they were meant to provoke and insult the community at large. The publication of such caricatures is seen in the larger context of the French state's anti-Islam policies which have discriminated against people for eating Halal food and  women wear the hijab.

"Our hearts are with the people of France. America stands with our oldest Ally in this fight," Trump tweeted.

Our hearts are with the people of France. America stands with our oldest Ally in this fight. These Radical Islamic terrorist attacks must stop immediately. No country, France or otherwise can long put up with it!

One of the first to condemn was Turkey, embroiled in a row with France over the publication of cartoons of the Prophet Muhammad that have triggered a wave of attacks against French people.

"We strongly condemn the attack committed today inside the Notre-Dame church in Nice," a Turkish Foreign Ministry statement said.

It expressed solidarity with France and offered condolences to relatives of the three people killed in the attack. 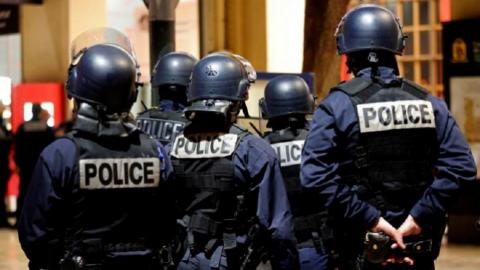 Shooting in front of mosque in France injures at least eight