Milorad Dodik says he will prioritise the interests of Bosnia's Serb-dominated region as he becomes a candidate to become president of a state he has repeatedly attacked as unviable and harmful for Serbs.

Bosnian Serb leader Milorad Dodik, who seeks the secession of Bosnia's Serb-dominated region, announced his official candidacy on Tuesday for the Serb seat in the country's inter-ethnic presidency in an October 7 vote.

Post-war Bosnia is made up of two autonomous regions, the Bosniak-Croat Federation and the Serb Republic (RS), linked via a weak central government and a presidency comprised of Serb, Croat and Muslim Bosniak members.

Dodik looks an unlikely candidate to represent a state that he has repeatedly attacked as unviable and harmful for Serbs, but opted for the job as he cannot run again for president of Bosnia's Serb Republic after his second term expires in October.

His close ally Zeljka Cvijanovic, who now serves as RS prime minister, will run to replace him as the entity's president.

Dodik said he was sure of an election victory and that he would work solely in the interest of the Serb Republic.

"I am fully convinced that Republika Srpska will be strengthened in this way," Dodik said after a convention of his Alliance of Independent Social Democrats party (SNSD). "It will be a priority for me to put the interests of Republika Srpska first."

Bosnia's presidency generally oversees its foreign relations although Dodik, if elected, is likely to try to use his Sarajevo-based post to improve the image of the RS.

He was blacklisted by the United States after he organised a referendum on a legally disputed RS national holiday despite a ban issued by Bosnia's constitutional court in 2016.

Dodik, who favours closer ties with Russia over those with the West, has also served three terms as RS prime minister since 1998, when the United States and other Western sponsors of Bosnia's peace process embraced him as a moderate Serb politician following the country's 1992-95 war.

But over the past decade he has switched to a nationalist course. He raised international alarm with his announcement of a referendum for RS independence in 2018, though he later cancelled the move.

A Bosniak-Croat referendum vote for Bosnian independence from then-federal Yugoslavia in 1992 was opposed by Serbs and led to three years of Europe's bloodiest conflict since World War Two. Bosnia was divided into two autonomous regions under the 1995 Dayton peace treaty. 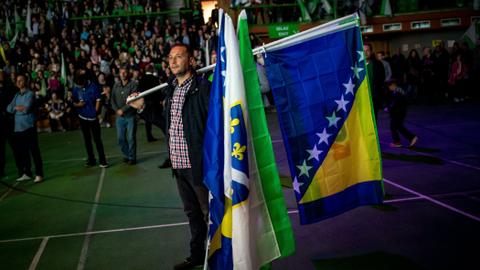 People in Bosnia to head to the polls amid major differences