The victory of the two opposition parties was a heavy rebuke to parties led by former guerrillas who battled Serbia in the 1990s, paving the way for Kosovo's independence.

Opposition parties won the night in Kosovo's election Sunday taking the lead over former guerrillas who have dominated politics for the past decade.

The leftist-nationalist Vetevendosje was in first place with 26 percent of the vote, followed by the centre-right LDK who had 25.2 percent after more than three-quarters of the ballots were counted, the electoral commission said.

The victory of the two opposition parties was a heavy rebuke to parties led by former guerrillas who battled Serbia in the 1990s, paving the way for Kosovo's independence.

"We did not win. We accept the verdict of the people and the PDK moves to the opposition," said Kadri Veseli, leader of the PDK party that has been in power since 2007 and is linked to President Hashim Thaci.

While Vetevendosje and LDK have little overlap ideologically, they have already discussed the possibility of joining forces.

The party with the most votes will be tasked with forming the new government.

If the trend continues, it could be Vetevendosje's leader Albin Kurti, a 44-year-old who first gained fame as a student activist protesting Serbian repression in the 1990s before the war.

He has since become a strident critic of Kosovo’s political elite, and his place at the helm would herald a new era for the young democracy.

Sunday's snap poll was called after ex-prime minister Ramush Haradinaj, a former guerrilla commander, resigned in July to face questioning by a special court in The Hague investigating war crimes from the 1998-99 separatist conflict with Serbia.

His party, which was allied with the PDK in the former government but this time ran alone, had one of the weaker showings with 11.6 percent.

The new leaders will now be under heavy pressure from the West to revive talks with Serbia.

The neighbours have yet to normalise ties two decades after they clashed in war, a lingering source of instability in Europe.

Kosovo, a former Serbian province, is recognised by most of the West but it needs Belgrade — and its allies Russia and China — to accept its statehood so it can get a seat in the United Nations.

Serbia is also under pressure to make peace with Kosovo in order to move forward with its EU accession process.

Yet their EU-led dialogue has been at a standstill for more than a year, with frequent diplomatic provocations souring efforts to build goodwill.

If the dialogue with Belgrade does resume, one of the most sensitive issues will be settling what powers to grant Serb-majority administrations in Kosovo.

There are approximately 40,000 Serbs living in the north and 80,000 scattered in and around a dozen enclaves in other parts of Kosovo, whose population is mainly ethnic Albanian.

Serbs have 10 reserved seats in parliament.

The Srpska Lista, which aligns with Belgrade, looked set for a landslide.

Speaking in Belgrade, Serbian President Aleksandar Vucic said he would be ready to talk to Kurti's party if they are deemed the "legitimate representatives" of Kosovo. 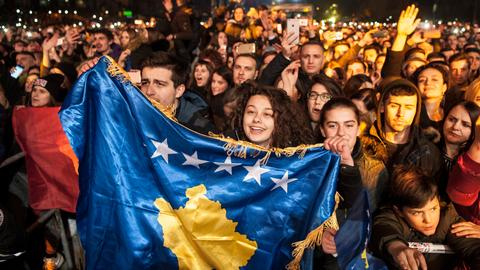