The baguette was initially the mainstay of wealthy metropolitans, but after World War II, the bread became the emblem of all French people.

It is as much a part of French culture as the Eiffel Tower or Edith Piaf but the origins of the humble baguette, which UNESCO added to its List of Intangible Cultural Heritage, remain a mystery.

Here are some of the more popular theories:

The oldest tale has the baguette being kneaded by bakers in Napoleon's army. Less bulky than a traditional loaf, the long slim shape of the baguette made it faster to bake in brick ovens hastily erected on the battlefield.

France's most famous man of war was preoccupied with getting his men their daily bread.

During his Russian campaign in 1812, he toured the ovens daily to sample the day's offering and ensure the crusty batons were distributed regularly, according to historian Philippe de Segur.

He also had portable bread mills sent to occupied Moscow, but the setbacks suffered by the Grande Armee in one of the deadliest military campaigns in history ended his bid to export the doughy staple.

Another theory has the baguette starting out in a Viennese bakery in central Paris in the late 1830s.

Artillery officer and entrepreneur August Zang brought Austria's culinary savoir-faire to Paris in the form of the oval-shaped bread that was standard in his country at the time.

According to the Compagnonnage des boulangers et des patissiers, the French bakers' network, Zang decided to make the loaves longer to make them easier for the city's bread women to pluck from the big carts they pushed through the city's streets.

Another theory has the baguette being born at the same time as the metro for the 1900 Paris Exposition.

People from across France came to work on the underground, and fights would often break out on-site between labourers armed with knives, which they used to slice big round loaves of bread for lunch.

According to the herodote.net history site, one engineer had the idea of ordering longer loaves that could be broken by hand to avoid bloodshed.

In 1919, a new law aimed to improve the lives of bakers by banning them from working from 10 pm to 4 am.

The reform gave them less time to prepare the traditional sourdough loaf for the morning, marking the widespread transition to what was called at the time the yeast-based "flute", which rose faster and was out of the oven in under half an hour.

Standardised at 80 cm (30 inches) and 250 grams (eight ounces) with a fixed price until 1986, the baguette was initially the mainstay of wealthy metropolitans, but after World War II, it became the emblem of all French people. 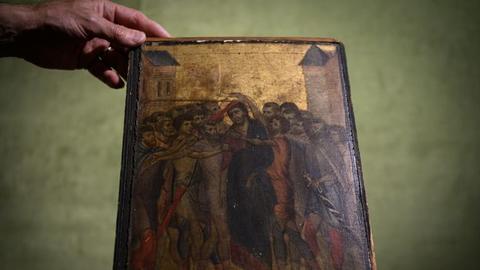