Several thousand people in Yerevan protested against the nomination of former president Serzh Sarkisian as prime minister under a new parliamentary political system.

Several thousand protesters staged rallies on Monday in the Armenian capital against former president Serzh Sarkisian as he moves to maintain a chokehold on power as prime minister.

Demonstrators marched through the centre of the capital Yerevan and blocked streets in opposition to a change of government that will see Sarkisian maintain huge influence under a new parliamentary system of government.

Some protesters chanted "Armenia without Serzh" and "Serzh is a liar."

"Our goal right now is to prevent Serzh Sarkisian from becoming the country's leader for a third time without violence and the use of force," said opposition leader Nikol Pashinian who led the protesters.

On Monday, the ruling Republican Party and the government-friendly Dashnaktsutyun Party formally nominated Sarkisian as candidate for the post of prime minister despite the protests.

The pro-Moscow politician is expected to be elected by parliament on Tuesday.

The protesters took to the streets after opposition leader Pashinian called on Armenians to stage rallies to prevent Sarkisian's political transition.

Several hundred people sat or lay down on pavements on Monday, blocking roads leading to the parliament building and universities.

Authorities beefed up police presence and put in place cordons which some protesters broke through. Police urged protesters not to violate public order.

"Such actions can lead to crimes against the citizens' life, health and property," police said in a statement.

Rallies began on Friday when more than 4,000 people took part.

A shrewd former military officer, Sarkisian has been in charge of the landlocked South Caucasus nation of 2.9 million since winning a presidential vote in 2008.

The country's new figurehead president, Armen Sarkisian, was sworn in last week but his powers will be weaker under a new parliamentary system of government.

The two men are not related.

Opposition politicians say the shift to a parliamentary republic with a powerful prime minister has been designed to increase Serzh Sarkisian's grip on power in the impoverished Moscow-allied country.

Tensions in Armenia often flare up during presidential and parliamentary elections.

After Sarkisian was first elected president in February 2008, 10 people died in bloody clashes between police and supporters of the defeated opposition candidate. 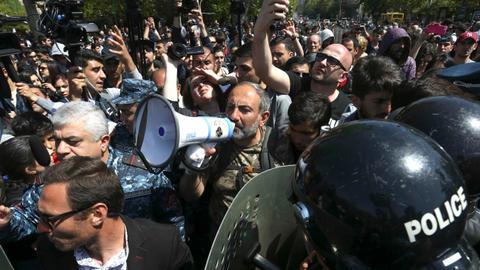 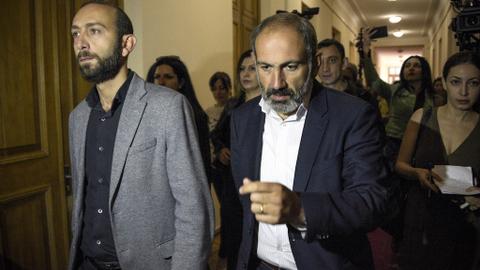