The central government in Madrid is staunchly against the vote, which has been ruled unconstitutional by the courts, and has used all legal tools at its disposal to stop it from taking place.

Spanish riot police burst into polling stations across Catalonia on Sunday confiscating ballot boxes and voting papers to try to halt a banned referendum on a split from Spain as Madrid asserted its authority over the rebel region.

Police broke down doors to force entry into voting stations as defiant Catalans shouted "Out with the occupying forces!" and sang the anthem of the wealthy northeastern region. In one incident in Barcelona, police fired rubber bullets. At least 38 people have been injured so far.

The referendum, declared illegal by Spain's central government, has thrown the country into its worst constitutional crisis in decades and deepened a centuries-old rift between Madrid and Barcelona.

Despite the police action, hundreds-strong queues of people formed in cities and villages throughout the region to cast their votes.

Polling stations' opening hours would not be extended, a regional government spokesman said, but all those still queuing would be allowed to vote. It was still not known when the results would be announced, he said, adding it had been a long day and it would be a long count.

Catalan leader Carles Puigdemont originally said that if the "yes" vote won, the Catalan government would declare independence within 48 hours, but regional leaders have since acknowledged Madrid's crackdown has undermined the vote.

However, if many vote, a "yes" result is likely, given that most of those who support independence are expected to cast ballots while most of those against it are not.

The ballot will have no legal status as it has been blocked by Spain's Constitutional Court and Madrid for being at odds with the 1978 constitution.

A minority of around 40 percent of Catalans support independence, polls show, although a majority want to hold a referendum on the issue. The region of 7.5 million people has an economy larger than that of Portugal.

However much voting takes place, a "yes" result is likely, given that most of those who support independence are expected to cast ballots while most of those against it are not.

Police burst into the polling station in a town in Girona province minutes before Catalan leader Carles Puigdemont was due to vote there.

They smashed glass panels to force open the door as voters, fists in the air, sang the Catalan anthem.

Puigdemont accused Spanish authorities of using "unjustified, disproportionate and irresponsible" violence in a crackdown on the referendum.

The batons, rubber bullets and violence used by Spanish police to prevent voting in what Spanish authorities have said was an illegal referendum had shown a "dreadful external image of Spain", he told reporters.

"The unjustified, disproportionate and irresponsible violence of the Spanish state today has not only failed to stop Catalans' desire to vote ... but has helped to clarify all the doubts we had to resolve today," he said.

Civil Guard national police reinforcements also began deploying in the pre-dawn darkness in Barcelona where about 100 police vans streamed into the capital of Catalonia from the port where they had been stationed.

“I have got up early because my country needs me,” Eulalia Espinal, a 65-year-old pensioner who started queuing with around 100 others outside one polling station, a Barcelona school, in rain at about 5 am (0300 GMT) said.

But there was no sign of ballot boxes or voting slips on the tables being set up at the station where Espinal was queuing.

“We don’t know what’s going to happen but we have to be here,” she said.

The planned referendum has sown divisions among Catalans and stoked passions further afield in Spain.

Opinion polls show the region is deeply divided over independence, but a large majority of Catalans want to be able to settle the matter in a referendum, though most would prefer it to be legal and binding.

Organisers had asked voters to turn out early and for “massive” crowds to be lined up waiting to vote by 7:30 am (0530 GMT), hoping for this to be the world’s first image of voting day.

Leading up to the referendum, Spanish police arrested Catalan officials, seized campaigning leaflets, sealed off many of the 2,300 schools designated as polling stations and occupied the Catalan government’s communications hub.

But Catalan leaders, backed by pro-independence supporters, have refused to abandon their plans. Families have occupied scores of schools earmarked as voting centres, sleeping overnight in an attempt to prevent police from sealing them off.

If some voting goes ahead, a “yes” result is likely, given that many unionists are not expected to turn out.

“If I can’t vote, I want to turn out in the streets and say sincerely that we want to vote,” said independence supporter Jose Miro, a 60-year-old schools inspector.

Only the Catalan police, or Mossos d’Esquadra, have so far been monitoring polling stations. They are held in affection by Catalans, especially after they hunted down Islamists accused of staging deadly attacks in the region in August.

Pro-independence Catalan leader Puigdemont originally said that if the “yes” vote won, the Catalan government would declare independence within 48 hours, but regional leaders have since acknowledged Madrid’s crackdown has undermined the vote.

Markets have reacted cautiously but calmly to the situation so far, though credit rating agency S&P said on Friday that protracted tensions in Catalonia could hurt Spain’s economic outlook. The region accounts for about a fifth of the economy.

The ballot will have no legal status as it has been blocked by Spain’s Constitutional Court, and Madrid has the ultimate power under its 1978 charter to suspend the regional government’s authority to rule if it declares independence.

The Madrid government, which has sent thousands of police to Catalonia to enforce a court ban on the vote, believes it has done enough to prevent any meaningful referendum taking place.

Farmers have used tractors to guard polling stations in 30 Catalan towns, according to Spanish media reports. They included one at a sports centre in Sant Julia de Ramis, near Girona, where Puigdemont was scheduled to vote later.

At other polling centres, activists carried away schools’ iron gates to make it harder to seal them off. 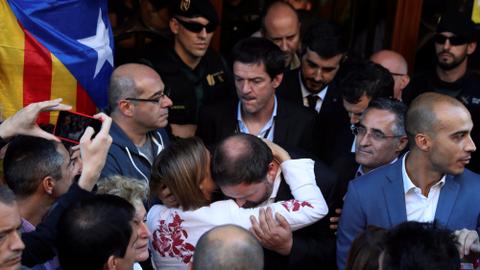 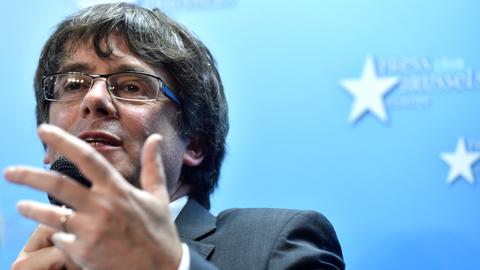 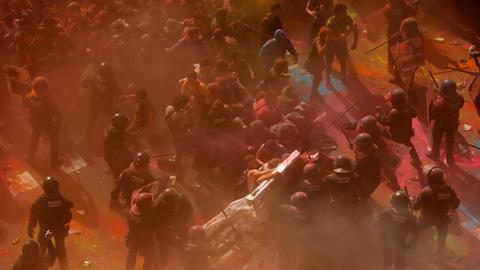