Thousands flee to safety as wildfires rage across Greece

Hundreds of houses and swathes of pine forests burned down on the island of Evia, Greece’s second-largest, as the country tackles more than 90 fires across the country.

Thousands of residents fled to safety from a wildfire that burned for a fourth day north of Athens, during an overnight battle to stop the flames reaching populated areas, electricity installations and historic sites.

On the nearby island of Evia, the coast guard on Thursday mounted a massive operation with patrol boats and private vessels to evacuate hundreds of people by sea. The evacuation continue on Friday morning.

"It's a very sad moment," said Konstantinos Konstantinidise, a villager in Evia who had to evacuate as a violent fire ravages the Greek island, one of dozens of blazes that have torn through the country this week in the worst heatwave in over three decades.

"Luckily everyone is ok," he told an AFP reporter.

"We're going to bounce back, hopefully with state help, and we hope to be able to enjoy the summer in our village like we always did," the 79-year-old said.

In Kourkouloi, his village, thick yellow smoke covers the top of the mountain as water-bombing planes and helicopters fly up ahead over and over again in a relentless struggle against the flames.

Firefighters were battling a series of raging blazes in sweltering heat on Thursday in western and eastern Greece, and on the outskirts of Athens where a fire that had been coming under control regained strength.

"We will be fighting on all fronts throughout the day. The conditions are tough, very unusual," civil protection minister Michalis Chrisochoidis told ERT television.

Six out of thirteen regions, including Attica where Athens is located, have been placed on high alert for Friday, Prime Minister Kyriakos Mitsotakis announced on Thursday evening.

"Our country is facing an extremely critical situation," he said, as the country experiences the worst heatwave in more than 30 years that has seen temperatures rise to 45 degrees Celsius in some places.

#Greece update| just arrived in Athens and the visibility in the center of town isn’t great. Smoke from the fires to the North has produced a hazy layer across the city. No signs of fires coming in from the airport last night. pic.twitter.com/DFft150nfC

According to Giannis Tsapourniotis, the mayor of Mantoudi in Evia, the island blaze is spreading on four fronts, including one that is advancing out of control near a monastery that was forcefully evacuated on Wednesday.

The 12 monks at Saint David Monastery agreed to leave after several hours of negotiations with security forces.

In Kourkoloi, local resident Ioannis Aslanis says he saved what he could.

"It's a disaster, everything burnt in the village."

On the island, the second biggest in Greece after Crete, some 500 soldiers assisted by around 40 planes and helicopters were due to arrive on Thursday as back-up, said Konstantinos Floros, head of the armed forces.

Hundreds of houses have already burnt down on the island, as have swathes of pine forests.

Nearly 60 villages and settlements were evacuated Thursday and early Friday across southern Greece, with weather conditions expected to worsen as strong winds were predicted in much of the country.

Firefighters said Thursday morning they had had to tackle 92 blazes within 24 hours.

North of Athens, a blaze that firefighters had hoped to control regained strength on Thursday evening, after having destroyed large areas of pine forests.

Traffic was halted on the country's main highway connecting Athens to northern Greece, as crews tried to use the road as a barrier to stop the flames advancing before water-dropping planes resumed flights at first light. But sparks and burning pine cones carried the fire across the highway at several points.

Asylum seekers in a nearby camp were also due to be transferred to other facilities, according to the migrations ministry.

Acrid smoke from the fire poured over Athens, where the air quality has deteriorated fast.

The wildfires in Greece are terrifying and depressing. It's also upsetting to see the Greek government interpret climate change not as a motivator of action and structural change but rather as a justification of inaction and helplessness. #πυρκαγιες #wildfires pic.twitter.com/QfkB5ydvzE 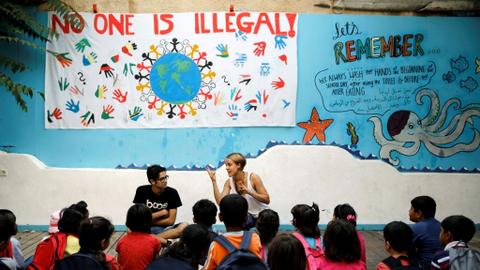