Protesters in Warsaw assembled outside courthouses and placed lights around the buildings in a show of support for judges.

Thousands of government opponents protested in Warsaw and other cities in Poland on Sunday against new judicial reforms and future plans to change the Supreme Court.

Legislation that was adopted last week has drawn condemnation from European Union politicians and from Poland's opposition. They say it violates judicial independence and the rule of law.

Under the new legislation, lawmakers appoint members of the National Council of the Judiciary, which draws up and enforces ethical guidelines for judges, reviews judicial candidates and seeks opinions on new rules and regulations to ensure they are constitutional.

Another draft law calls for the retirement of all Supreme Court judges and new appointments to be made by the justice minister, and reorganisation of its work. Among the court's tasks is confirming the validity of elections and ruling on especially difficult cases.

The protesters gathered twice on Sunday, first during the day in city centres. In the evening, they assembled outside courthouses and placed lights around the buildings in a show of support for judges.

The demonstrations, held under the slogan of "In the defence of the courts," were the latest in a string of mass anti-government demonstrations challenging the conservative, populist Law and Justice party, which has been in power for 20 months.

Their main theme has been the defence of democracy under the ruling party, which controls both houses of parliament and also enjoys support from President Andrzej Duda.

The fractured and weak opposition has posed little challenge to the government, other than participating in the protests.

In Warsaw, a noisy crowd gathered before the parliament building, chanting "we will defend democracy" and other slogans against ruling party leader, Jaroslaw Kaczynski, who is Poland's most powerful politician, whom they called a "dictator."

"We, the citizens, are defending the rule of law, we are on the side of the law," said one of the protest leaders, Wladyslaw Frasyniuk, a top pro-democracy activist in the 1980s.

The main opposition party's leader and a former foreign minister, Grzegorz Schetyna, warned that the ruling party may use the new regulations to manipulate electoral returns. Crowds also gathered in Krakow, Szczecin, Poznan and elsewhere.

The ruling party has already put loyalists on another top court, the Constitutional Tribunal, a move that has drawn condemnation from European Union leaders.

Kaczynski, a lawyer, insists Poland's judiciary system is a continuation of the communist-era one. He says the court system is inefficient and needs "radical changes" and new people.

Many experts and judges agree that the justice system and especially courts need reforms that would speed up the handling of cases, but say Law and Justice proposals are going in the wrong direction.

Poland is still a young democracy, after it shed communist rule in 1989 and joined the EU in 2004. 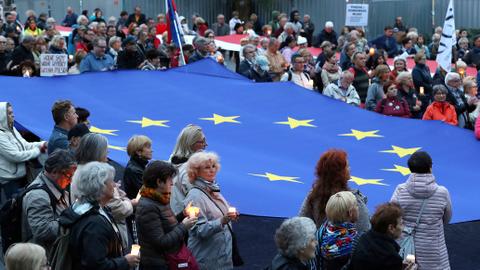