Turkey's ambassador to Sarajevo on Thursday condemned the vandalism of a historic mosque under reconstruction in Banja Luka, Bosnia and Herzegovina.

"Such attacks will not succeed in fulfilling the attackers’ goals, because Turkey and Bosnia and Herzegovina have deep-rooted relations and a common history and culture," Haldun Koc said.

Assailants spray-painted swastikas as well as Serbian nationalist symbols on the mosque.

Koc said the attack had been a deliberate provocation. "We have to be very precise and responsive on these issues. The Bosnian authorities are also sensitive, and I know that they condemn this heinous act," said Koc.

The 16th-century mosque, located in Banja Luka in Republika Srpska (RS) in northwestern Bosnia and Herzegovina, was completely demolished by Serb forces during the 1992-1995 Bosnian War.

Owing to its historical importance, it has been under reconstruction by Turkey's Foundations General Directorate since 2017.

Republika Srpska police said on Wednesday that the case is being investigated.

"An investigation has been launched to find the perpetrators of the ugly attack on mosque walls," said a police statement.

Dubbing the attack "extremist and nationalist," the statement also condemned the racist act. 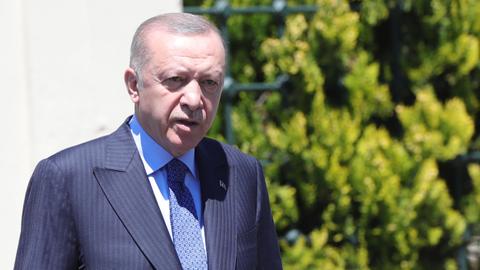