Pope Francis' ongoing efforts to clean up Vatican governance reaches a milestone with the first ever jail sentence issued by a Vatican state court in relation to financial crimes.

A former head of the Vatican bank, Angelo Caloia, has been found guilty of embezzlement and money laundering and sentenced to eight years, 11 months in prison.

It was the first ever jail sentence issued by a Vatican state court in relation to financial crimes, a milestone in Pope Francis' ongoing efforts to clean up Vatican governance on Thursday.

Caloia led the bank, officially known as the Institute for Religious Works (IOR), from 1989 to 2009.

The 81-year-old Italian was tried over corrupt real estate deals.

He was accused of conspiring with others to make millions from the below-market sale of more than 20 IOR properties in Italy, and laundering the proceeds in Switzerland.

The court established that the defendants "pocketed some of the money paid by buyers, or in any case money belonging to IOR ... for a total of $23 million," the Vatican said in a statement.

Prosecutors claimed the illicit gains were worth $71.7 million in total, but judges did not find evidence of wrongdoing for some of the 29 deals under scrutiny.

Co-defendants were 97-year-old Gabriele Liuzzo, a lawyer, and his son Lamberto, 55, who were sentenced to eight years and 11 months, and five years and two months respectively.

The three men were hit with fines ranging from $9,700 to $15,100, and ordered to pay damages of around $28 million to the IOR and its real estate division SGIR.

One of Caloia's lawyers, Rosa Palavera, told AFP that Thursday's ruling would be suspended given that it was still subject to an appeal — meaning that he does not risk going to jail immediately.

A former IOR director general, Lelio Scaletti, was a fourth suspect in the affair, but the case against him was dropped after he died in 2015.

The scandal came to light in 2014, after Caloia and Scaletti's bank accounts were frozen following a criminal complaint from the IOR.

The IOR, founded nearly 80 years ago, has been embroiled in a long list of political and financial scandals, gaining a reputation as a money laundering haven for Italian politicians and mafia groups.

It has cleaned up its act over the last decade, as part of Vatican financial transparency reforms pursued by Francis and his predecessor Benedict XVI.

Vatican prosecutors are currently investigating another suspect real estate deal, concerning a luxury property in central London, which may lead to a criminal trial.

And earlier this week they announced the imminent start of an embezzlement trial against Cecilia Marogna, known as "the Cardinal's Lady" for her links with disgraced Cardinal Angelo Becciu.

She billed the Vatican around $608,000 for informal intelligence work, but is suspected of using part of the money to splurge on luxury goods.

Marogna was hired by Becciu, who was fired from a powerful Vatican job in September by the pope, after he accused him of syphoning off Vatican charity funds to help his siblings.

Becciu has professed his innocence, and since his dismissal he has not been publicly charged with any crimes.

READ MORE: Will the pandemic force the Catholic Church to transform? 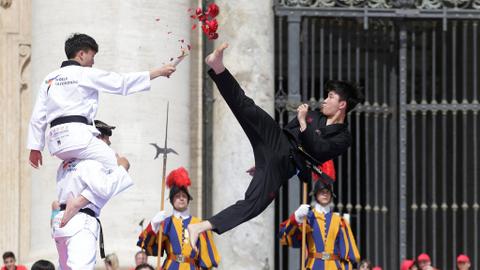