Both states are part of the European Union and have tried to maintain neutrality - until Russia’s recent offensive in Ukraine.

One of the main drivers of Russia’s offensive in Ukraine was to stop NATO’s eastern expansion towards Russia’s borders but its conflict with Kiev has achieved the opposite by pushing neutral states like Sweden and Finland into joining the Western alliance.

Now both Sweden and Finland are publicly seeking NATO membership. If both states join the Western alliance, it means NATO will get even closer to Russian borders, expanding its eastern flank further.

But their move toward NATO has the potential to invite more trouble as the Kremlin has starkly warned the two states that if they join NATO, Moscow might consider deploying nuclear weapons into Kaliningrad, a Russian Baltic enclave.

“In this case, it will no longer be possible to talk about any nonnuclear status of the Baltic—the balance must be restored,” said Dmitry Medvedev, deputy chairman of Russia’s Security Council, who was also the country’s former president, on Thursday, referring to Kaliningrad.

Also in late February, Russia issued a clear threat to both states. "Clearly [the] accession of Finland and Sweden into NATO, which is first and foremost a military alliance, would have serious military-political repercussions that would demand a response from our country," said Maria Zakharova, Russia's Foreign Ministry spokeswoman.

However, until the explosion of the Ukraine crisis nearly two months ago, both Finland and Sweden’s neutrality have been seen as possible models to address the conflict between Kiev and Moscow, which fiercely opposed Ukraine’s membership to NATO.

While both states have a complicated history with Russia, as EU members, how have they managed their non-NATO status?

Sweden’s political history with Russia has long been a major determinant of Stockholm's Moscow policy and its neutrality.

Sweden and Russia share a common history dating back to the 9th century, when a Swedish Varangian (Viking) ruler, Rurik, founded the history’s first Russian state, Kievan Rus, whose successors would later also establish the Tsardom of Russia based in Moscow.

But from the 12th century to early 19th century, both nations fought several wars with each other, seeing some Swedish armies marching toward Moscow. During the 17th century, when the Swedish kingdom supported Ukrainian rebellions against Muscovite leadership, Russia emerged stronger from different conflicts, reaching the Baltics and controlling the region.

In the following centuries, in other conflicts, Russia established its superiority over the Swedes and during the Napoleonic Wars, a rapprochement developed between the two states as Moscow protected Sweden against French leader Napoleon Bonaparte’s invasion. During the same period, Sweden also lost Finland to Russia.

Since then, there has been no military conflict between Moscow and Stockholm. As a result, the 19th century rapprochement and Sweden’s loss of significant territories during the Napoleonic Wars resulted in the emergence of Swedish neutrality.

After the Napoleonic Wars, the country adopted a foreign policy based on no direct military involvement, which is also called the Policy of 1812. While Sweden has not been in any direct armed conflict with any country since 1813, its neutrality is overtly manifested in its ties with Russia.

As a result, during the Cold War, Sweden chose to stay neutral. After the Cold War, its neutrality stayed largely intact. While the country became a member of the EU in 1995, it has significantly reduced its military capabilities, continuing to remain a non-aligned state.

But Russia’s Ukraine offensive has presented a clear challenge to the country’s centuries-old neutrality stance as not only Swedish public opinion, but also its political leaders, now believe that NATO might be the only military means to protect Stockholm from any threats from Moscow.

“There is a before and after 24 February,” said Magdalena Andersson, the Swedish prime minister, referring to the beginning of the Russian attack on Ukraine. “The security landscape has completely changed,” she added, indicating that Sweden is seriously considering joining NATO.

Like Sweden, Finland also has a long relationship with Russia. Under Rurik, the first Viking ruler of Kievan Rus, Finnic tribes were also instrumental in forming the first Russian state based in Kiev.

But unlike Sweden, Finland borders Russia like Ukraine. The country had also been under Russian rule from the early 19th century to the 1917 Bolshevik Revolution, when the country won its independence. Even during World War II, Finland had to fight a bloody invasion of the Soviet Union under Joseph Stalin, losing more than 10 percent of its border territories to Moscow.

As a result, both Russian rule under the Tsars and the Soviet invasion during WWII made the Finnish state, which has a 1287km border with Russia, adopt an official neutral foreign policy in 1955. But the state’s neutrality largely emerged thanks to an agreement between Finland and the USSR signed in 1948.

As a signatory to the Treaty of Friendship, Cooperation and Mutual Assistance, Finland promised not to join any military alliance against the USSR, the predecessor state of Russia. Also Helsinki pledged that it would not allow any other forces to use its territory to attack the Soviets. Similarly, the USSR pledged not to invade Finland.

Since then, Finland has remained neutral and chose not to be a NATO state even after the Cold War, developing strong connections with both the West and Russia. Finnish public opinion has also long favoured neutrality.

But Russia’s Ukraine assault has marked a critical milestone in Finland’s neutrality, like in Sweden. With the Russian attack, public opinion has swiftly changed in favour of joining NATO - from 20 percent previously to over 60 percent today. The country’s political parties now also support NATO membership.

“We have to be prepared for all kinds of actions from Russia…There is no other way to have security guarantees than under NATO’s deterrence and common defense as guaranteed by NATO’s Article 5,” said Finnish Prime Minister Sanna Marin on Wednesday.

Article 5 refers to the alliance’s critical pledge that if a member were attacked, NATO would consider it an attack on all. 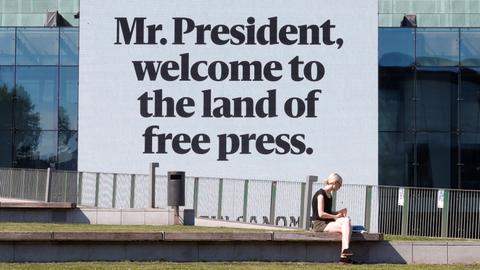