Turkey’s Bayraktar Akinci PT-2 TIHA (unmanned aerial vehicle) has completed stringent testing and has been delivered to the Turkish Armed Forces (TAF) in a ceremony attended by Turkey’s president.

Baykar Defence Chief Technology Officer Seljuk Bayraktar unveiled the new and improved Akinci drone in an official reveal held in Ankara, Turkey. The Akinci, Turkish for “Raider”, features a wingspan of 20 metres, ranking it among the largest Turkish drones currently in production.

Delivering a keynote speech at the launch on Sunday, Turkey’s President Recep Tayyip Erdogan hailed the leap in Turkish defence capabilities, reminding attendees that Ankara “cannot turn a blind eye to atrocities around the world.” He emphasised the importance of technology in “bringing peace, not wars.”

The Akinci UCAV is expected to see use on the TCG Anadolu, an amphibious assault ship of Turkish manufacture that features a take-off deck.

While executed by Bayrak Defence, the project is overseen by Dr Ismail Demir, President of Turkish Defence Industries who announced 2021 as a strategic year where old projects will be delivered as the Turkish defence industry pivots to more advanced defence offerings. Dr Demir was one of the pioneers of Turkey’s shift to a more sustainable defence industry based on domestic producers and suppliers.

Six units are slated for delivery to TAF by the end of 2021. The Akinci unmanned combat aerial vehicle (UCAV) first made news after breaking a Turkish aviation altitude record flying for 25 hours and 46 minutes at 38,000 feet while carrying a payload of 1,360 kilograms over a distance of 7,500 km. To put that into perspective, while an F-16 fighter jet can reach altitudes of 50,000 feet, it performs best between 30,000 to 40,000 feet.

With over 875 test flights and sorties, the indigenously manufactured Akinci drone is a high-altitude, long-endurance tactical unmanned aerial vehicle capable of conducting intelligence gathering, surveillance and reconnaissance, as well as armed precision attacks.

Not to be confused with the Bayraktar TB2 drone, an initial step into the armed drone industry, the Akinci UCAV marks a shift towards larger more advanced drone production, bringing it into the heavyweight bracket of the United State’s General Atomics MQ-9 Reaper, which has long been withheld from Turkey.

The initial TB2 drone saw overwhelming success in military operations around the world, with over 160 Bayraktar TB2 platforms in use around the world. The light drone has a range of 150 km, nearly one fifth that of the MQ-9 ‘hunter-killer Reaper drone, but offers reliability, and advanced capabilities at a far less expensive price tag, described as having qualities reminiscent of the Soviet Kalashnikov AK-47 rifle that changed warfare in the 20th century,” according to a Wall Street Journal report.

Their appeal and effectiveness have quickly garnered international attention for countries looking to build up their drone capabilities, with six Bayraktar TB2 drones, their command centres, and operational equipment priced in the tens of millions instead of the hundreds of millions usually quoted for US MQ-9 Reaper drones.

The affordability, access and effectiveness offered by the drone has given rise to active discussions among defence analysts, generals and policymakers of the revolutionary rise of drone power in the 21st century. Baykar’s Akinci UCAV further establishes Turkey’s position within the highly-competitive global defence economy, while presenting governments with more powerful and versatile drone solutions.

The 6-ton unmanned aerial vehicle can only be produced in 4 countries, and is equipped with cost-effective Roketsan smart micro-munitions (MAM), variants of which are used with F-16 fighter jets, unmanned drones and other light aircraft.

Firing tests were successfully completed on April 22 2021, which saw the first use of Roketsan’s small intelligent munitions.

Embracing a modern design-philosophy, the smart micro-munitions compromise on weight and explosive yield in favour of precision, allowing for more strikes per sortie and a larger capacity for more munitions. This capability enhances the role of small, rapid ground missions and more efficient precision-firepower, while making air support of troops on the ground more feasible, and minimises risk of friendly fire or civilian casualty.

The Akinci UCAV drone punches above its weight class, with two 450 horsepower engines that can keep it aloft for a day, a carrying load of nearly 1 tonne. Equipped with Roketsan’s smart micro-munitions (MAM) which weigh between 6.5 to 94 kilograms, the Akinci UCAV merges between core design concepts that emphasise long-distance force projection, speed and precision. The design also features multiple configurations, with either two smaller (200 horsepower) or larger (750 horsepower engines).

The latest micro munitions developed by Roketsan for the Akinci are by and large the smallest explosive warheads developed in Turkey to date, dwarfed in size by Roketsan’s fighter-jet stand-off missiles (SOM) capable of locating and tracking targets independently. SOM missiles can also manoeuvre at low altitudes to evade defences. With a range of 250+ km, they are expected to eventually reach a range of 1500 km with further development.

The current micro-munitions suite provides different options for various missions. This includes high-explosive fragmentation warheads that are effective against soft targets like radars and entrenchments, combatants in a large area, unarmoured vehicles and light structures. Roketsan also provides a heavier anti-tank version, and a thermobaric high-explosive variant that relies on rapid high-heat air and fuel combustion, yielding an intense pressure blast. The current MAM suite features range between 8 kilometres up to 14 kilometres if advanced navigation and positioning tools are used.

Using domestically-produced ammunition not only stimulates the Turkish defence economy further and diversifies it further, but also ensures the sustainability of supply and easier logistics for Turkish operations, a key priority of Turkish national defence strategy. A similar principle of interoperability allows the Akinci to use a wide suite of missiles and munitions from multiple Turkish defence manufacturers.

In a major step forward for networked battlefield awareness and management systems, used by most advanced militaries around the world, the Akinci UCAV is set to feature a next-generation radar.

This offers higher battlefield awareness and intelligence gathering, on a level previously only available to intelligence, surveillance, and reconnaissance (ISR) planes and advanced fighter jets, while allowing for signals intelligence and 3D mapping transfers even in bad weather.

Aside from its competitive radar, the Akinci will also feature an electro-optical/infrared, beyond line of sight awareness satellite uplink, while making use of modern artificial intelligence features that passively manage flight details including angle, standing and heading using geographical features without relying on GPS. The limited artificial intelligence will also assist detection of targets that cannot be seen by the human eye. 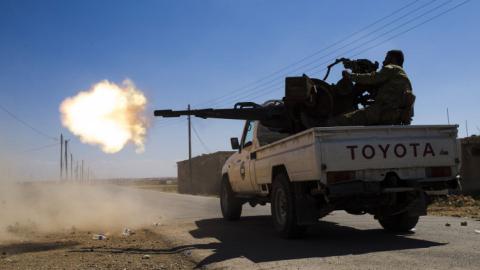