Israel is unusually heading for its fourth election in two years after successive elections have failed to lead to the formation of a stable government.

The instability has increased both partisanship and mudslinging across the Israeli political spectrum ahead of the country going to the polls on March 23.

A recent political advertisement from Prime Minister Benjamin Netanyahu’s ultra-Orthodox coalition partners has suggested that Reform Jews are no more than tiny dogs, a metaphor which appears to imply that they are not ‘real’ Jews and are incapable of protecting Israel in the tough Middle East. The political ad showed dogs wearing Jewish religious items like the kippah, tallit and tefillin accompanied by sidelocks and glasses. Reform Jews defend a more liberal version of Judaism, regarding the Jewish Law as non-binding.

The latest spat between Orthodox Jewish groups and Reform Judaism has been rooted in the eternal debate over how a person can be recognised as a Jew and which kind of measures should be considered to identify a person as a Jew. Proof of Jewish descendancy has long been one of the most decisive measures to gain Israeli citizenship.

Unlike other religions, in Judaism, heritage is a crucial determinant of being a Jew. In Judaism, if you have a Jewish mother, you are qualified to be a Jew.

But the Israeli Supreme Court recently took a controversial decision where it ruled that a person converted from other faiths and denominations without any Jewish descendancy can be considered a Jew. As a result, they can claim Israeli citizenship according to the court.

The decision has angered the Orthodox Jewish community.

“When the question of ‘Who is a Jew' is put in the hands of the High Court, this is the result,” said United Torah Judaism, in an angry video posted on one of the party’s social media channels.

In the video, the ultra-Orthodox group also made an insulting reference to the concept of female rabbis, calling them “grandmother”. Reform Judaism allows female rabbis, contrary to the Orthodox understanding of the religion.

"Jews branded kosher by the High Court. Danger! Thousands of infiltrators and foreign workers will become Jews through Reform conversion. Only Shas will preserve a Jewish state," said a Shas party poster on Wednesday. The poster showed three Black men as potential candidates or “infiltrators” according to their description of future Jews.

Most Orthodox Jews consider the country’s secularist institutions, like the High Court, as part of Reform Judaism, finding them an affront to their exacting religious standards.

On paper, Israel is a secularist state. Zionism, the founding ideology of Israel, is also based on secularist principles that are founded in religious principles. According to some accounts, Theodor Herzl, the founding father of Zionism, was a fierce secularist and an admirer of Spinoza’s philosophy. Spinoza was a Jewish atheist to many.

“The High Court passed a resolution that endangers the Law of Return, which is a fundamental pillar of Israel as a Jewish and democratic state. Only a vote for the Likud will ensure a stable right-wing government that restores sovereignty to the people and the Knesset,” the party said in a Twitter post on its official account.

While Reform and Orthodox Jewish groups have clashed on the identity of Jews, in the past, the Nazis cared little for those nuances, killing and imprisoning anyone who was considered Jewish during the Holocaust.

“My father once told me that on the parliament building in Budapest (the Hungarian capital) there was a sign saying 'No entry for Jews and dogs'. Antisemites throughout the generations compared between Jews and dogs, now United Torah Judaism have joined them,” said Yair Lapid, the leader of the Yesh Atid Party, an opposition group. 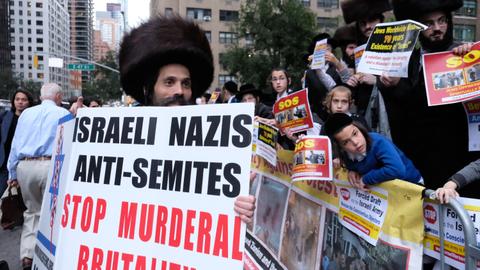 'He doesn’t represent us': Orthodox Jews protest Israeli PM at the UN