The disappearance of Ahmed Samir Santawy is the latest in a disturbing pattern of intimidation and harassment of academics and researchers by Egyptian authorities.

An Egyptian graduate student and human rights researcher, Ahmed Samir Santawy, has been arbitrarily detained by Egyptian national security forces after being interrogated on February 1.

According to a statement by the Association of the Freedom of Thought and Expression (AFTE), Santawy’s lawyer was not allowed to attend and provide him with legal assistance while in police custody on the day, and all communication has been cut off since.

Santawy, 29, a second-year masters student in Sociology and Social Anthropology at Central European University (CEU) in Austria, was on vacation in Egypt visiting his family during the winter holidays.

Upon his arrival at Sharm El Sheikh International Airport, he was stopped and interrogated by airport police, but not detained.

Reports said his family’s home in Cairo was then raided by national security forces on January 23 while Santawy was away in Dahab, South Sinai. Officers confiscated a digital video recorder from the home’s CCTV system and requested Santawy to present himself at the police station in the New Cairo neighborhood of the First Settlement.

After he visited the station on January 30, he was instructed to come back on February 1, and has since disappeared. Santawy’s family contacted the Attorney General’s office demanding his release after no contact with him for over 72 hours.

AFTE called on the Ministry of Interior of Egypt to release Santawy and reiterated its demand to Egyptian security forces to “stop the pattern of intimidation and arrests faced by researchers, violating their rights and disrupting their studies.”

CEU Rector and President Michael Ignatieff called for Santawy’s “immediate release and for his safe return to his family and to his studies”.

TRT World was last in touch with Santawy on January 29, after publishing an article which included accounts of his move to Austria following CEU’s exodus from Hungary.

When interviewed for the article at the end of December, he mentioned he returned to Egypt from Vienna on December 15 right after securing his Austrian residency permit. At no point did Santawy indicate concern that he was under threat from the Egyptian authorities.

According to the Egyptian Front for Human Rights (EFHR), Santawy is a vocal human rights defender, and has been involved with several human rights organisations since 2011.

His activism spanned work with various human rights organisations in the country. In the two years before he left Egypt to attend CEU, he was working as a human rights researcher with the Regional Centre for Rights and Freedoms.

EFHR believes that Santawy’s arrest comes as the direct result of his academic work and human rights activism.

Given Egypt’s national security forces’ notorious reputation for ill-treatment and torture of detainees, many believe Santawy’s safety is under imminent threat – and that his detention is part of a broader crackdown against dissent, academic and media freedoms under general-turned-president Abdel Fattah al Sisi’s government.

Santawy is only the latest student or academic to be forcibly detained in Egypt in recent years.

Patrick George Zaki, a master’s student at University of Bologna in Italy, just completed a year in pre-trial detention this month after being arrested by security forces last February upon returning to Egypt during academic holidays.

Zaki is in custody pending investigation into charges of spreading false news and calling for unauthorised protests.

Walid Salem, a PhD researcher at the University of Washington, was another academic arrested after carrying out fieldwork in Egypt. Salem was released on bail pending trial in December 2018 after spending 9 months in pre-trial detention, but his passport was withdrawn and banned from travelling.

Giulio Regeni, an Italian PhD candidate at the University of Cambridge researching independent trade unions in Egypt, disappeared in January 2016. His body was found several days later on the outskirts of Cairo bearing marks of severe torture. 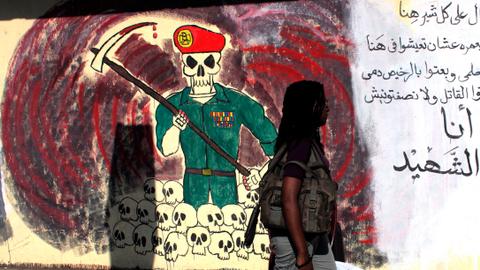