A large number of Finns no longer seem happy with centrist politics, so they are gravitating toward angry, hate-spewing politicians.

Finland’s recent elections have helped the country's far-right movement make significant gains, a common trend across Europe that is thriving on the fears of mass migration and economic recession.

The idea of Finns being susceptible to far-right rhetoric was, until recently, unheard of, especially when the country has been listed as the happiest nation in the world, according to the United Nations. Independent watchdog Freedom House also reported that the country belongs to a handful of nations, including Sweden and Norway, where people enjoy the most freedoms.

On April 14, the election results came as an unpleasant awakening as the country’s far-right party, the Finns Party, also known as the True Finns, emerged as the second largest party with 17.5 percent of the vote share. It became clear that its anti-migrant and eurosceptic political agenda has a large number of takers across the country.

Far-right gains have happened at the expense of centrists, who became the biggest losers of the elections with a 13 percent decline in their vote share. The Centre Party was leading a governing coalition and its leader was the prime minister before the elections.

The rise of the far-right becomes more remarkable in light of infighting between moderates and hardliners that surfaced after the 2015 elections. The root of the dischord was the True Finns joining hands with the ruling Centre Party, which hoped to soften the far-right group by making them accountable in their governing ranks.

The conservative leadership finally pulled the plug in 2017, leaving the coalition government and choosing a new hardliner leader, Jussi Halla-aho. Their liberal counterparts, however, formed a new party called the Blue Reform.

No sooner did the results make rounds than Halla-aho faced the media in a celebratory mood. For far-right hardliners it was a moment of unexpected success. They had earned one-fifth of the total 200 seats in Finland's parliament.

The defected Blue Reform party did not win a single seat, however.

"I could not expect a result like this, and no-one could," Halla-aho said on election night.

During the campaign, the hardliner leader defended ‘almost zero’ tolerance for incoming refugees, promising to build border walls like US President Donald Trump has currently been seeking at the Mexico border.

Halla-aho is inspired by Hitler’s Mein Kampf. Like Hitler, he believes a person's race determines his intelligence. Sometimes his speculations can get wild. In one of his blog posts, he wrote that the left-wing would only wake up after their female politicians were raped by refugees.

Under recent media pressure, he backtracked from some of his previous statements and apologised for expressing "a variety of principled views in a needlessly brutal way".

He doesn't regret his racist, Islamophobic statements, however.

He's known for making vile remarks against Islam and on one occasion he even described it as a “religion of paedophilia and plunder”. The country’s Supreme Court was quick to charge him with ‘ethnic agitation’.

“I don’t regret that particular text, because it still makes the right point,” he unapologetically wrote on Twitter on April 20.

During the election campaign, Hallo-aho’s party released a video, a horror film, in which Finns are shown angry and turning into a ‘pissed-off monster’, which attacks the country’s masked political leaders who are dubbed traitors. 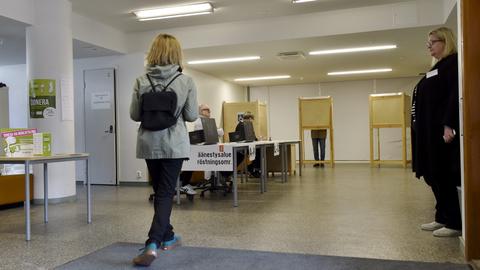