A grassroots petition calls for an immediate airlift for all people at risk in Afghanistan and a federal program to resettle Afghan refugees in safe zones across Germany.

Similar to other Western countries pulling out of Afghanistan, Germany is now scrambling to organise the evacuation of Afghans who assisted its military and humanitarian missions over the last twenty years.

Officials across various states have called on Interior Minister Horst Seehofer to start a new Afghan refugee program, following the lead of Lower Saxony’s Boris Pistorius who said a federal program would be a “faster and more efficient solution” than if individual states attempted to organise resettlements.

And now, momentum is being built with a grassroots campaign to pressure politicians to start a federal program to declare parts of Germany safe zones for Afghan refugees.

Managing Director of the Berlin-based Afghan association Yaar, Kava Spartak has been leading the campaign, which demands the German government commit to take in at least 20,000 people that are at immediate risk along with their families.

“We are asking for the immediate airlift of employees of German NGOs, journalists, academics, women’s rights activists – anyone in danger of falling into the hands of the Taliban,” Spartak told TRT World.

Within a few hours on Tuesday, Spartak and other organisers managed to mobilise over 3,000 people to demonstrate in front of the Bundestag (German parliament). Shortly after the demo, a petition went online and nearly 30,000 signatures were collected within 24 hours.

Another demo was held on Sunday in Berlin, with between 5,000-7,000 people attending.

It's pouring rain here in #Berlin but hundreds have turned up to call for urgent, unconditional #safepassage for #Afghan people whose lives are currently at risk in #Afghanistan.

Several protests are organized across 🇩🇪#Germany over the weekend. pic.twitter.com/kHfqYcN8v7

While some moderate political voices see the solution as lending third countries more support to host refugees and provide further humanitarian aid to Afghanistan, Spartak is adamant it isn’t a feasible standalone strategy given the urgency of the moment. “We want them to come to Germany.”

“We should be taking closer to forty to fifty thousand,” he added, pointing to how Canada has already pledged to take 20,000 Afghans – a country whose presence in Afghanistan was less than Germany’s.

Germany has the largest Afghan population in Europe, numbering close to 272,000.

The campaign is also advocating for a continuation of the UN Assistance Mission to Afghanistan (UNAMA) mandate and to monitor human rights violations by the Taliban.

“We want Germany to have a leading role and a special commission to analyse the whole Afghanistan mission for the last twenty years,” Spartak said. Such an initiative would ideally be trans-party in nature and include civil society as well as the Afghan diaspora.

For those trying to absolve themselves of responsibility, Spartak said there’s no point trying to condemn the USSR, Saudi Arabia, or Pakistan for what happened in the 1980s, arguing there’s plenty of blame for the crisis in Afghanistan to go around.

“What’s happened can be blamed on forty countries,” he said, noting a collective responsibility that extends beyond borders.

“There has to be an international approach to what’s happening not only inside but outside of Afghanistan to work against the racism Afghans in Pakistan, Iran, Turkey and European countries.”

With the German elections around the corner on September 26, there is fear that the issue could either be put on the backburner or used as a lightning rod for anti-immigrant animus.

Known for having an open-door policy for refugees, (outgoing) German Chancellor Angela Merkel’s government was among the first to welcome over a million people fleeing the war in Syria in 2015.

However, the wave of refugees that arrived in 2015 and 2016 still haunt German politics, with the country still struggling with issues of immigration and integration.

Anti-immigrant sentiment helped fuel the far-right party Alternative for Germany (AfD) into a national political force, becoming the largest opposition party in the German parliament in 2017.

“The mistakes regarding the Syrian civil war must not be made again,” Armin Laschet, the chancellor candidate for the centre-right Christian Democrats (CDU) in the upcoming general elections, tweeted as the Taliban took Kabul on Sunday. “2015 shall not be repeated.”

For now, Spartak hopes the issue doesn’t disappear from public consciousness and remains a political conversation leading up to the elections.

“If not, we will make it a topic for the elections,” he said. 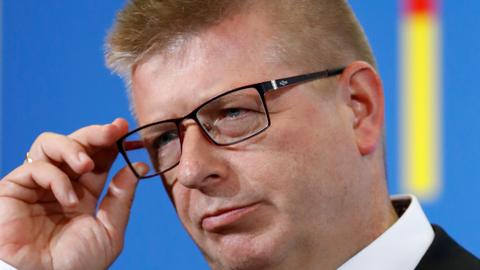 What pushed Germany to place the far-right AfD under surveillance?