1
In a bid to counter Russia, Libya seeks US military base
2
Fleeing the bombs, Syrians set up camp underground
3
What does Bernie Sanders's AIPAC snub mean?
4
Erdogan says no 'full' agreement on Syria summit

The Zionist state treats Arab-Israelis as second-class citizens but woos Arab states such as Saudi Arabia, the UAE, Egypt and Sudan, who have been reciprocating positively.

Israel has no qualms about developing warm relations with pacified Arab states — Saudi Arabia, the UAE, Egypt and now Sudan — while mistreating its Arab minority, encouraging structural violence and racism against them.

"For weeks [Israeli Prime Minister Benjamin] Netanyahu is sending us one message, you're not wanted," said Ayman Odeh, the leader of the Arab Joint List, an alliance of Israeli Arab parties, blaming the Israeli right wing for provoking ultra-Jewish groups to attack Arab citizens of the country.

"Today we see the results," Odeh said, referring to recently increased attacks to both Palestinians and the Israeli citizens of Palestinian origin.

In September, Netanyahu even resorted to hate speech on his official Facebook page. In an attempt to tarnish the image of the opposition parties, he said his political rivals are ready to collaborate with the Arabs “who want to destroy” all Israeli Jews including “women, children and men”. The remark was perceived as racist and bigoted, compelling the tech behemoth Facebook to suspend the Likud’s use of automated messaging for 24 hours.

While the same Netanyahu blasts Arabs at home, he appears to be in a perfect tune with other autocratic rulers of Arab states like Saudi Arabia, UAE, Bahrain and Egypt, all of whom tacitly or publicly express a necessity to normalise ties with Israel.

Israel claims to be a democracy, but Netanyahu and others like him want to demonise the country’s Arab-dominated parties. While Odeh’s Joint List, which is an alliance of different Arab parties, is the third biggest political group at Knesset, the Israeli parliament, no one appears to be willing to work with them, treating them as pariahs.

Before September’s elections, there was some discussion that the Blue and White Party leader Benny Gantz, Netanyahu’s biggest rival, might form a government with the Joint List, and Netanyahu appears to be very concerned with that idea.

Netanyahu, the Likud Party leader and the country’s longest serving prime minister, has been facing the prospect of losing power after being unable to claim general elections in April. A snap second poll in September also failed to deliver him a victory and next month he will be trying for a third time to claim elections.

He has been indicted by the country’s attorney general on several corruption charges and desperately needs a win to avoid jail time and political estrangement.

As a result, he appears to be willing to utilise all means to win elections, including playing an anti-Arab card, which could be useful to bring more votes to him in the upcoming elections by limiting the Joint List’s reach across Israel.

After the September elections, Odeh and most of his supporters declared their support for Gantz to establish an Israeli government, but since then, there has been no visible connection between them. US President Donald Trump’s ‘deal of the century’ has also increased their differences. While Gantz supports the deal, the Joint List fiercely opposes it.

According to the deal, which has been backed by Gulf countries and Egypt, Israeli Arabs should be transferred to the so-called sovereign Palestinian state’s diminished territories, which is an unwelcome invitation for the Joint List and its supporters. 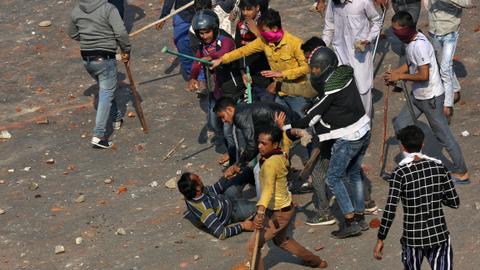 1
In a bid to counter Russia, Libya seeks US military base
2
Fleeing the bombs, Syrians set up camp underground
3
What does Bernie Sanders's AIPAC snub mean?
4
Erdogan says no 'full' agreement on Syria summit