Three former Syrian prisoners have come forward with shocking accounts of torture and despicable living standards in the Assad regime’s prisons, detailing the struggles of detainees within.

The released men were hosted by the Syrian Revolution Coordination Union. One of the men, Salaah Ashour, spent 25 years in the regime’s labyrinthine prisons. This also included Hasna Alhariri, and Maysoon Libad, who narrowly escaped capital punishment after being arrested for delivering medical supplies to the wounded. After her arrest, Maysoon was imprisoned and tortured before ultimately being sentenced to death.

The three free survivors narrated their gruesome testimonies on a Zoom call, sharing the details of life on the inside of Syria’s notorious prisons. They share horrific stories of rampant abuse, amputated limbs, rape, electric power drills being used on prisoners, and mass graves where victims of torture are discarded.

Hanaa Darwish, Secretary-General of the Syrian Revolution Coordination Union says they usually mark detention day on December 1st every year with programs featuring former prisoners, but this year they held it online for health and safety precautions.

Salaah Ashour, who originally hails from Hamaa, northern Syria, says he didn’t see his face in a mirror once during the length of his imprisonment which stretched from 1980 to 2004, which was mostly spent in the infamous Tadmor prison.

While the rest of the world knows Palmyra for its stunning Roman ruins, it’s Arabic name evokes chills in most Syrians, home to what has been described as the worst prison in the world. Before being destroyed by ISIS, the Tadmor prison was synonymous with horror, death, and grotesque torture.

Originally built in the middle of a blistering desert 200 kilometres northeast of Damascus by the French in the 1930s, it would gain its sordid reputation under Hafez al-Assad’s iron rule. While he was in power, thousands of dissidents were abused, tortured and executed there.

Ashour painfully narrates how his gaolers would mutilate his face with a straight-razor or blade, while singing October revolution songs to make sure he was still alive. He also describes how younger youths were regularly raped. At times, he says, their mothers, and sisters were raped to force rubber-stamped confessions out of them.

As he continues to tell his tale, Ashour relates witnessing his jailers cut off a male prisoner’s genitals, and another prisoner’s ear; only to pressure them during interrogations.

In his interview with Al Jazeera Net, he was asked about what drove the Syrian regime’s security apparatus to such horrors, and how they justified such torture. “Their thuggish mentality,” he answers, which is inflicted on Syrians without distinguishing political leaning, or ethnic, sectarian or religious affiliation.

“Imagine being beaten and tortured for twenty-one long years, denied the sight of your family. During the winter, the prison is made colder. In summers, they turn the heating on. You feel like exploding from the heat. All this happening years after the end of interrogations and investigations,” adds Ashour.

Ashour emphasizes that this “thug mentality” must be countered by wisdom and rationality on the part of revolutionary forces, pointing out that the regime’s victims managed to coexist and even cooperate inside the prisons, facilitating a cultured, civilized spirit of working together.

He also relates how a prisoner’s torture also includes the suffering of his family the entire time he’s incarcerated, with no news of him from within the prison. Tragically, his mother and father both passed away from a stroke after receiving conflicting stories about his fate.

Alhariri is from Basr al-Harir, which sits in the countryside of Daraa, southwest Syria. She recounts multiple accounts of torture she witnessed while imprisoned first in 2011, and again in 2012.

The mother to four martyrs who died in the course of the revolution, says she witnessed traumatizing, gruesome scenes during her second imprisonment with her daughter, which lasted for three years. During the course of her incarceration, she was transferred between a number of prisons and detention facilities spanning Deraa and Damascus.

In her first days as a prisoner at a military prison run by the 102nd Brigade, she witnessed jailers burying youth who died after succumbing to torture in interrogation chambers.

Alhariri adds that when she was transferred to Deraa, she stayed in an overcrowded room with 30 other prisoners. Every night, her jailers would choose one or more female prisoners, after which they would be taken for what they thought was interrogation. They would return in a deplorable physical and mental state, and refuse to talk about what was done to them.

“I witnessed with my eyes as they gouged a prisoner's eyes out with a screwdriver, and drilled his neck and chest with a power drill. Then an interrogator asked one of the soldiers, “Is he dead?!”, and he was answered in the affirmative. So he replied, throw him into the Hamam. Before they took his corpse away, they wrote, “Traitor to the Nation” on his chest,” relates Alhariri.

After her horrific time in Deraa, she was transferred to Damascus on a bus carrying 40 inmates, 6 of whom were women. The trip was a part of hell, describes Alhariri, with the inside of the bus coated in mesh and metal chains. By the time they arrived at their new detainment facility in Damascus, the inside of the bus felt like a raging inferno.

“They were literally kicking us out of the bus, and hitting every single prisoner, even though most of them were already injured from torture. I was shocked by the square we had arrived in. It was carpeted with naked corpses of male and female prisoners”, Alhariri recounts.

When asked what questions did the interrogators ask of her, Alhariri says they were primarily interested in getting her to confess to receiving instructions from Israel, and receiving funding from Saudi Arabia, Qatar or Kuwait.

She would refuse this, telling them she was from Deraa, and that Syrians had come out in self-defense after their homes, wealth and honour were the targets of attacks.

Her jailers separated her from the 6 other women and threw her into solitary confinement for 8 days before transferring her to the female prison cell, which Alhariri describes as a new scene from “hell”.

She recalls they placed her in a room with “nearly 75 women… closer to a sanitarium for the insane, and the female prisoners had lost their minds. There was a jailer called Mohamed Alia who stripped every female prisoner that entered the prison and raped her. Among the girls, there were so many that were pregnant, after being subject to these violations.”

Maysoon Libad, now an activist from Deraa, presents another gruesome testimony the deplorable circumstances of Assad regime prisoners. In it, she relates how they were made to sign blank confession statements to make the torture stop.

Libad was active in the medical sector, and performed first aid to the injured during Deraa’s protests. That was, until she was arrested after being followed during one of her visits to Damascus in 2012. She would go on to spend a year and a half in prison.

After her arrest, she summarily moved to Branch 215, one of 20 security branches operated by the Assad Regime’s feared military intelligence.

In it, she spent two months in solitary confinement. During that time, she was regularly subject to brutal torture, including left hanging from bound hands for long periods of time, being whipped, and being pushed into a fetal position, and then forced into a tire. When they were done with her, they would throw her in the trunk of a car.

The activist was the victim of agonizing beatings in Deraa by members of Branch 215. After being thrown in a room with 15 other female inmates for a month, where she claims she met captives from Lebanon who had no idea that Hafez al-Assad had died.

Shortly after, she was transferred to Adra Prison, northeast of Damascus. It was there that she met a Jordanian fellow prisoner with Palestinian roots. She also met a Libyan, who claimed to be a member of the late Muammmar al-Qaddafi’s retinue, as well as one woman serving a life sentence after being arrested with her husband, who was killed in an interrogation that culminated in a verdict finding them guilty of an attempted assassination of the late Lebanese Prime Minister Saad Hariri.

“I met one female prisoner who was the victim of rape, and there was another women from the Alawite sect who had a stroke and they let her be without providing any assistance. The conditions of the prison were the worst, between the deplorable state of hygiene, measly food, and torture,” she recounts.

Libad, who now studies political science in Jordan, concludes her gruesome tale, “They forced me to sign 20 blank papers, then they filled it with prepared accusations and presented it to a court of law.” 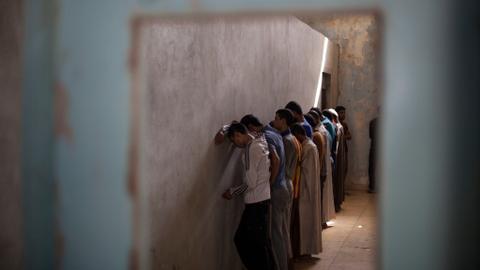