With Human Rights Watch calling them “men with no mercy”, the paramilitary group has been accused of various crimes from enforced disappearances to torture across Sudan.

As Sudan is witnessing yet another military coup since the fall of its dictator Omar al Bashir in 2019, the military junta has deployed a ruthless band of paramilitary troops, Rapid Support Forces (RSF), to crush public dissent.

The Sudanese military put the country’s transitional Prime Minister Abdalla Hamdok and other ministers under arrest on Monday, while clashing with anti-coup protesters across the capital Khartoum and other cities.

One of the world’s poorest countries, Sudan's most powerful institution is its army, which took control of the state by dismantling the transitional civilian government.

The junta gave a free hand to the RSF, which has the worst record of maintaining human rights, and ensured their men were deployed at critical intersections of the capital to tighten their control over Khartoum.

The RSF was established in 2013 to fight armed rebel groups in the country’s war-torn Darfur region. Its blood-stained existence has increased fears in Sudan’s pro-democracy circles that the country might enter another difficult phase in its complicated history.

“The participation and deployment of the RSF - a force with a well-documented record of abuse including during its deployment in law enforcement operations is alarming,” says Mohamed Osman, a Human Rights Watch (HRW) researcher on Sudan.

Osman thinks that military leaders need “to send a clear message that abusive operations will be punished” in the face of the coup.

But it’s not clear how much coup leaders really want to control groups like the RSF with ties to both intelligence and military apparatuses as the security situation in Sudan deteriorates with expanding protests in the country, where the economic crisis has also gotten worse under the pandemic.

Following widespread protests in 2019,  the military ousted Bashir. After a period of political uncertainty, the military and pro-democracy civilian leaders signeda power-sharing agreement in mid-2019, establishing a transitional civilian government.

According to the country’s transitional constitutional charter, which resulted from the power-sharing deal, the RSF has been defined as a regular military force without any authority over detentions and law enforcement tasks.

But as the military tightens up its grip on power, it appears that controlling the RSF, which has long been under the country’s second most powerful general, Mohammed Hamdan "Hemeti" Dagolo, will be a menacing task for anyone.

Even prior to the military coup, the RSF detained people despite having no legal authority under the transitional charter, according to the HRW.

Why was the RSF formed?

The RSF was established by the Sudanese government during the Darfur conflict, in which Khartoum used some of the country’s Arab tribes organised under Janjaweed militias against rebel groups to suppress the rebellion.

For a long time, Darfur’s sedentary population and nomadic tribes have been at odds over allocating natural resources in the region. When the conflict emerged in the first place, the central Sudanese government appeared to use this dichotomy to mobilise some nomadic tribes against rebel groups.

Under Sudan’s National Intelligence and Security Service (NISS), Janjaweed militias were turned into the RSF to fight armed rebellion in Darfur and other provinces like South Kordofan and the Blue Nile.

During military operations, the RSF have operated under the Sudanese military. The group’s commander Hemeti, a Chadian Arab, who settled in the Darfur region in his teenage years, wasa Janjaweed militia leader, a vital force in forming the RSF. HRW has accused Hemeti of committing various war crimes.

While the initial purpose for creating the RSF was to develop a military instrument against Darfur rebels, later on, the paramilitary group has been used in the crackdowns against protests and other rebel activities across Sudan. 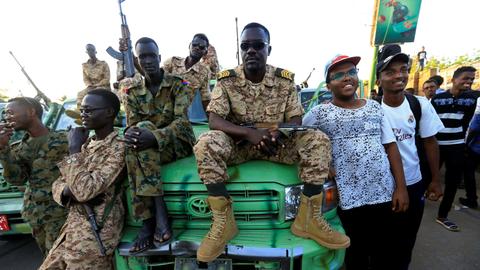