As a mass evacuation continues from eastern Ghouta to Idlib under a Russian-brokered deal also guaranteed safety for remaining civilians, medics who have been systematically attacked in hospitals have no option but to leave.

Thousands of people in eastern Ghouta have left their homes for camps in Idlib after Russia reached deals with two of the armed opposition groups in the region. Under the deals, Russia agreed to ensure that the civilians who choose to remain in the regime-captured areas would be protected from persecution, the second biggest opposition group in the region, Rahman corps declared. But for the remaining medics, it is not an option to stay in Ghouta under the control of the Syrian regime, as they are seen as symbols of resistance.

“I work in the hospitals and everyone knows that I worked here as a medic for years. I don’t think the regime will forgive me. They will arrest me if I stay in Ghouta. I have no option,” Mohamad al Mahroum, an assistant doctor from Douma, the last rebel-held town in eastern Ghouta, tells TRT World.

The civilian areas and medical facilities in opposition-held areas in Syria have been subjected to an intense campaign of aerial attacks, which the medics called a systematic effort by the Syrian regime and its ally, Russia. Eastern Ghouta, which is an enclave very close to the capital, Damascus, has suffered a siege limiting access to basic needs such as food and medicine since early 2013.

In May 2017, Syria’s allies Russia and Iran agreed with Turkey to determine eastern Ghouta as one of the de-escalation zones.

The attacks have intensified since February, and more than 1,500 people including civilians and children have been killed.

The recent attacks, including the use of internationally banned chemical weapons, brought the medical system to near collapse with dozens of hospitals destroyed, and many other medical facilities forced to move underground.

“It’s Russia who is brokering the deal. We heard about massacres in towns of Saqba and Kufr Bat in Ghouta, which are returned to control of the regime. Five days after regime entered the city, they killed about 25 people,” Mahroum says.

“It’s a forced displacement by the regime and Russia. All the Syrians in Ghouta lost their hopes about staying in this land after regime control.”

No deal reached for Douma yet

In Mahroum’s town, Douma, there is neither a deal signed yet to ensure a safe evacuation of civilians and fighters, nor a guarantee given for the ones who are willing to remain in the city yet. Reports said, Jaysh al Islam, which controls the town and fights against Al Qaeda affiliates and Daesh, has been demanding an agreement without evacuation but Syria and its ally Russia threatened to carry out more bombings in the town unless the opposition agrees to evacuate.

“As the medical stuff, we are all too tired now. We have never seen anything like that. The air strikes didn’t stop, the shelling didn’t stop,” Mahroum says.

“The civilians’ situation and medical situation is getting worse day by day in Douma, as many of the hospitals are destroyed. There is some malnutrition support and clinical supplements, but no supplements for the intensive care unit and operations or surgery room. Many people are going to be amputees.”

The faith of around 150,000 residents of Douma is unknown, but an agreement of evacuation doesn’t mean certainty for the future of the people of eastern Ghouta.

In 2016, after a six-month siege, the opposition in eastern Aleppo surrendered to the regime with promises that people would be safely evacuated to the northern province of Idlib, which is also controlled by the opposition.

The busses carrying about 30,000 residents from Aleppo were attacked on their way to Idlib, when they were passing regime-controlled areas. The route to Idlib from eastern Ghouta is much longer and more difficult than the way from Aleppo.

“For the last five years we have been under siege, we don’t know what is outside of Ghouta, in the region, in the north or the other countries. We don’t know if we will be able to study or work,” Mahroum says.

“We want some real guarantees not to be arrested by the regime. We just want to be able to return home and want nothing but peace.” 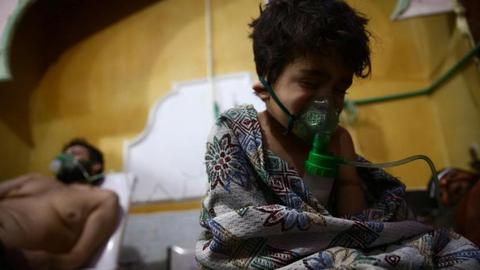