Ahmed Ouyahia appeared in court as part of anti-graft investigations which have also swept up other key ministers who once formed part of the ‘deep state’ that ruled Algeria from independence in 1962.

Ouyahia, 66, appeared before the High Court on Wednesday as part of a raft of anti-graft investigations opened into senior figures since President Abdelaziz Bouteflika stepped down last April.

Mohammed Ourab, a political analyst based in Istanbul, spoke to TRT World on the landmark charges.

“Mr Ouyahia will be questioned over malfeasance cases including ‘allocating illegitimate advantages’,” he said.

“Ouyahia’s arrest, was not a surprise event, but his detention will be received by the Algerians as a big triumph, his name is associated with many crises and scandals since the 1990s,” he added.

Ouyahia is the most recent figure to be investigated over corruption allegations following mass protests that swept the North African country more than three months ago, demanding the removal of the ruling regime and the prosecution of corruption and fraudulent political activity.

“I think the detention can be considered as a preliminary legal process that aims to get rid of the symbols of Bouteflika’s regime and also against the deep state led by many figures such as General Tawfik and Said Bouteflika,” Ourab explained.

“They are an emblem of financial and political fraud.”

Since last April, the army has become the most powerful institution with its Chief of Staff Ahmed Gaid Salah urging the judiciary to interrogate all people suspected of being involved in corruption.

Editor of the Shehab Press website, Fateh Ben Hammou, spoke to TRT World from Algiers on the legal struggles.

“These recent arrests targeting the former Algerian politicians are involved in what we can call internal conflict. Algeria’s Army Chief of Staff General Ahmed Gaid Salah is the one who ordered these arrests. He was motivated by the demands of the popular movement who called for eradication of all traces of Bouteflika’s regime,” said Hammou.

“We are interested to see if justice will act in accordance with the laws, especially after the  recent dismissal of the Supreme Court president.”

Ouyahia’s arrest is rather unique, and makes him the most significant politician in Algeria to be arrested since protesters called for change months ago. Their demands include a new political system, better living standards and rooting out corruption.

Ouyahia is the head of Algeria’s second largest party, the Democratic National Rally (RND) which is largely seen as a proxy to the ruling National Liberation Front (FLN).

His jailing follows the appearance of several senior Algerian leadership figures including another former prime minister, Abdelmalek Sellal, as well as eight former ministers in court to be tried for corruption.

A number of prominent businessmen, some close to Bouteflika, have also been detained as they await trial.

Protesters are now calling for the resignation of interim President Abdelkader Bensalah and Prime Minister Noureddine Bedoui, both seen as key figures of a deep state that has ruled Algeria since its independence from France in 1962.

Aissa Boukanoun is a Senior Producer for TRT Arabi.

Over 180 wounded in protests against Algeria's Bouteflika 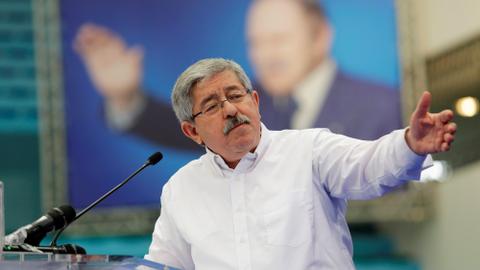