The Rafah border crossing with the Palestinian territory is mostly shut but opens at regular intervals. This would be the longest single opening in years.

Egyptian President Abdel Fattah al Sisi ordered on Thursday that the Rafah border crossing with the Gaza Strip be opened for the whole of the Muslim holy month of Ramadan, he said on his official Twitter account.

The border with the Palestinian territory is mostly shut but opens at regular intervals. This would be the longest single opening in years.

Sisi's Twitter account said the opening of the crossing would "alleviate the burdens of brothers in Gaza."

Israeli troops killed dozens of Palestinians on Monday who protested on the Gaza border as the United States opened its embassy in Jerusalem, moving its diplomatic mission in Israel to the contested holy city from Tel Aviv.

Hamas controls Gaza, but not its most important crossings, Rafah with Egypt and Erez with Israel.

It handed control of those crossings late last year to its rival, the West Bank-based Palestinian Authority, in a reconciliation deal signed in Cairo.

Egypt closed the border for long periods after attacks on Egyptian security forces in the Sinai Peninsula that increased in 2013, with Egyptian officials blaming Palestinian militants from Gaza for some of them. 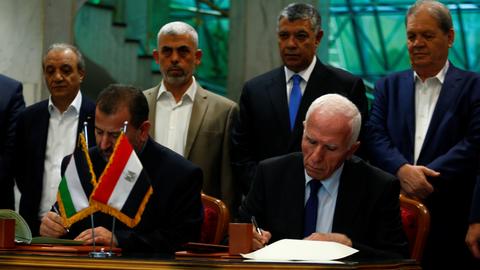