Protests were held in different parts of the Muslim world to mark Al Quds Day, which is held on the last Friday of Ramadan in support of Palestinians and Muslim rights in Jerusalem.

Medics said around 380 people were injured by Israeli fire during weekly protests.

The Israeli army said it was taking action to disperse some 10,000 Palestinians, some of whom threw rocks at the troops and burned tyres, and prevent any breach of the fortified frontier fence.

Israeli forces have killed at last 120 Palestinians in protests along the border since a campaign was launched on March 30 to demand the right to return to ancestral lands lost to Israel in the 1948 war of its creation, hospital officials say.

Organisers linked Friday’s protests to annual “Jerusalem Day” events in Iran, which like Gaza’s dominant Hamas preaches Israel’s destruction and was incensed by the US recognition in December of Jerusalem as the Israeli capital.

Elsewhere, anti-Israel marches were also held in Iran, Iraq and other Muslim countries.

Thousands of Shia Muslims marched in Tehran and Baghdad on Friday to mark "Jerusalem Day," in an annual protest against Israeli rule over the holy city and show of support for the Palestinians.

Some burned Israeli flags and effigies of President Donald Trump.

There was a large turnout in Gaza, raising concerns about renewed bloodshed.

At least 115 Palestinian protesters have been killed and close to 3,800 have been wounded by Israeli army fire since the marches began in late March.

Earlier on Friday, organisers urged Gaza residents to head to the perimeter fence with Israel after Muslim noon prayers.

The call was issued through mosques and loudspeakers mounted on cars that toured Gaza neighbourhoods.

Smaller groups have approached the fence, throwing stones, burning tires or sending kites with incendiary materials attached toward Israel with the aim to set fields there on fire.

Others have thrown fire bombs or tried to damage the fence. Israeli soldiers, including snipers perched behind earthen berms, have fired live bullets and tear gas.

Israel's use of potentially lethal force against the protesters, the vast majority of them unarmed, has drawn international criticism. Rights groups have said Israel's open-fire rules are unlawful.

Israel has accused Gaza's ruling group, the militant Hamas, of trying to carry out attacks and damage the fence under the guise of the protests.

Hamas leaders have threatened possible mass border breaches, raising concerns in Israel that communities near Gaza might be at risk.

The Jerusalem Day protests are held each year on the last Friday of the Muslim fasting month of Ramadan.

The day is known in Arabic as "Al Quds Day," a reference to the city's historic Arabic name.

Israel captured east Jerusalem in the 1967 Six-Day War and annexed it to its capital, a move not recognised by most of the international community.

Israel's current government has said it will not accept a partition of the city as part of a peace deal with the Palestinians.

The Al Aqsa Mosque compound in east Jerusalem, the third holiest site in Islam, is built on the spot where tradition says the Prophet Muhammad ascended to heaven.

The compound sits on the ruins of biblical temples and is revered as the holiest site of Judaism.

In Iran's capital of Tehran, thousands joined a Jerusalem Day march on Friday, chanting "Death to Israel" and burning a Trump effigy.

Iran and Israel are implacable foes. Iran does not recognise Israel and supports militant groups, including Hamas, the smaller Palestinian group Islamic Jihad and the Lebanese Hezbollah militia.

In Iraq, thousands of Iran-backed Shia militiamen in uniform marched through the streets of the capital of Baghdad on Friday, setting an Israeli flag on fire and carrying posters of the late Iranian leader Ayatollah Ruhollah Khomeini and Supreme Ayatollah Ali Khamenei.

Hundreds of Pakistanis also held a rally in the capital Islamabad and other major cities across the country in a show of solidarity with the Palestinians.

Chanting slogans "Down with America" and "Down with Israel," demonstrators burned an effigy of US President Donald Trump and Israeli flags.

They urged Muslim countries to sever diplomatic ties with Israel and support the Palestinians' struggle.

Scores of Syrians and Palestinians also marched through the streets of capital Damascus while chanting anti-Israel slogans.

The men and women marched from the Hamidiyah market in the old city of Damascus to the Umayyad Mosque, waving Palestinian flags. 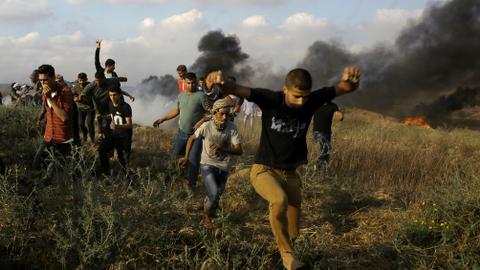