Youth must be put at the heart of development and innovation and given the opportunities and tools needed to take their countries into the future, says the Islamic Conference Youth Forum's new President Taha Ayhan.

For governments the world over, technology and innovation no longer form part of traditional agendas, but have reached the highest levels of strategic policy.

As developing countries around the world seek to close the gap between themselves and developed nations, challenges arise.

How do countries succeed on the global stage if they’ve had late industrial revolutions? The world’s developed nations continue to grow their knowledge economies all the while pushing the edge on innovative 5G technologies, advanced healthcare, and artificial intelligence.

It’s a challenge for the policy experts, and for developing nations it means fast, sustainable and far-reaching growth.

For the Islamic Conference Youth Forum, the challenge is daunting, but realisable and young people are the heart of it all. The latest step came in when Qatar's capital city Doha became the OIC Youth Capital for 2019.

The event is organised by the ICYF and the Qatari ministry of culture and youth, in a synergy of dedicated governance and committed policy leadership.

Doha is no exception. With the motto, “Doha: An Oasis for Innovation” the festivities and events bring together young civic society and tech leaders from around the world to network with youth in Qatar, with the aim of enhancing transnational synergy. Youth are given diplomatic simulations, capacity-building workshops, toolkits for change, and a chance to discuss policy and youth conditions with high-level policymakers.

Youth are invited to contribute to discussions on development and take part in projects and achievements. Their findings during sessions are used as key drivers in building future action plans.

For Iddi Ahmed, a young Cameroonian diplomat who spoke to TRT World, being invited to the event was the opportunity of a lifetime.

“The Doha Youth Capital events are a unique experience, especially for those who have never experienced a diplomatic simulation. It strengthens the bonds between youth of different backgrounds and countries,” says Iddi.

There is a caveat however.

“Unfortunately, there are countries and regions that are still reluctant to integrate with others, because they haven’t embraced new cultures of connectivity and cooperation yet,” he adds.

“Youth here benefit from experience, networking, and a growth in awareness on issues that affect us all. Our youth need to be built as future diplomats and ambassadors of their countries in every field. Better cooperation between states begins early on. What youth learn here today, should be taken back and implemented in their respective states,” concludes Iddi.

"We met youth from over 50 different countries, built long-standing networks to coordinate our work, and shared experiences on best practices for similar challenges for youth throughout our countries," says Burak.

"It's been a great exercise in broadening our minds, and improving the way we approach problems. The youth capital events focused on good governance, transparency, sustainable development goals and the role of youth in social media. After this great opportunity, I can frankly say I have a different and better approach to these fields," he adds.

To achieve all this, the Islamic Conference Youth Forum, an affiliated organ of the OIC, is leading the charge.

By leveraging the strategic human capital that youth represent, building up their capacities, and empowering them to make a difference, the 57 member states of the Organization of Islamic Cooperation -the second largest intergovernmental organisation in the world after the United Nations- it is making things happen.

The rationale behind the strategy is straight-forward. Nearly one-third of the world’s 1.8 billion young people live in OIC member countries that continue to enjoy high fertility rates, meaning that the ‘youth bulge’ as it’s come to be called, won’t go away anytime soon. Compared to developed countries that struggle with low youth to elderly rations, and an ‘elderly bulge’ that comes with high social security costs; it’s an opportunity.

For policymakers at the ICYF, young people can be engines of innovation, creativity, and energy; representing the most effective way to sustainably develop countries, if countries make the most of them.

At the heart of it all is Taha Ayan, the unanimously elected, third President of the ICYF.

With his strong background in law as a practicing attorney, and as the founding president of the Liberty and Justice association, he brings needed expertise to a demanding position in need of transformational strategy, managing global youth programmes, high-level diplomacy with OIC’s member countries, and a keen understanding of youth policy and change.

Prior to taking on the role of President, he served in a number of commissions, most recently as the deputy chairman of the AKP, president of youth branches in Istanbul, and a successful academic at the Plato College of Higher Education.

His commitment to enhancing the state of young people throughout the OIC and beyond, is based on a key premise.

“Youth should not be considered a challenge to be managed, but vital human capital in need of care and investment. Only by developing their knowledge, skills and competencies can youth become active, meaningful participants in our societies,” he writes in a foreword.

The name of the game is capacity-development. By using the OIC’s existing framework, the ICYF is ideally positioned to enhance government policies towards youth across 57 countries. This takes the form of high-level consultations, sharing best practices, producing reports, and ultimately implementing the OIC’s first youth strategy and joint youth plan of action, which was adopted recently by its many member states.

The strategy in itself is a bold undertaking. The visionary document outlines priorities and areas of needed growth in youth related fields, including education, employment, social inclusion, entrepreneurship, public health, engagement, extremism, migration and the environment. It only came about after years of research and consultation to ensure all countries would be on board with implementation.

Mandated with implementing the youth strategy throughout the OIC’s 57 member states, Ayan is using every tool and mechanism at ICYF’s disposal, including the OIC Startup incubator; an online platform that develops young entrepreneurs before matching them with keen investors.

The scope of ICYF’s projects is nothing less than significant. Its annual film, writing, and photography competitions alone take place worldwide; drawing global attention to key issues including migrants, development and the environment.

For the policymakers at ICYF, it’s not only a matter of achieving change, but of giving youth a platform to make change for themselves. Left unsaid throughout this all is the belief that key challenges such as the education-skill mismatch, underdevelopment, lack of opportunity, violence and low technological innovation can’t be solved with traditional top-down approaches.

Engage empowered youth, however, and two-way feedback loops between good governance and dynamic youth capital emerge, which is expected to make a major difference. 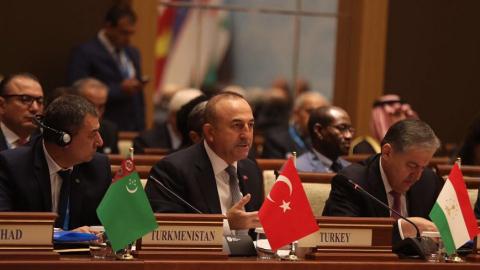