South African prosecutors argued on Friday that Oscar Pistorius' six-year jail sentence for murder must be increased, saying he failed to show genuine remorse after killing his girlfriend.

The Paralympic athlete shot Reeva Steenkamp dead in the early hours of Valentine's Day in 2013 when he fired four times through the door of his bedroom toilet.

He pleaded not guilty at his trial in 2014 and has always denied that he killed Steenkamp in a rage, saying he mistook her for a burglar.

At a one-day hearing at the Supreme Court of Appeal in Bloemfontein, state prosecutors fought for the right to appeal against what they described as a "shockingly lenient" sentence.

Pistorius, 30, was not present for the latest stage of his long legal case, but Steenkamp's mother June was in the public gallery.

"One of the essential ingredients of a balanced sentence is that it must reflect the seriousness of the offence," Andrea Johnson, of the National Prosecution Authority, told the court.

"Genuine remorse is missing – namely a reason from the respondent for firing the four fatal shots.

"One cannot say his regret absolves him from the crime."

In 2015, Pistorius found was guilty of murder, irrespective of whoever was behind the door when he opened fire with a pistol he kept under his bed.

He was given less than half of the minimum 15 years in jail for murder, in a ruling that the prosecution authority has fought to challenge.

Pistorius was originally convicted of culpable homicide – the equivalent of manslaughter – but the appeal court upgraded his conviction.

Pistorius' lawyer Barry Roux launched a strong defence of the judge who handed down the six-year sentence, saying she took into account his claim that he believed he was shooting an intruder.

"She balanced what he did with the circumstances," Roux said, adding that the judge understood Pistorius was "a broken man" after the killing and had repeatedly apologised to Steenkamp's family.

"It was a comprehensive judgement. Leave to appeal should not be granted," Roux said.

Members of the ruling African National Congress women's league, who have attended many of the court sessions, criticised the sentence for failing to send a message against domestic violence.

"We are not satisfied and we are not going to keep quiet until justice is served," local ANCWL chairwoman Mapaseka Nkoane told reporters.

"The only thing that could bring justice and peace to all the women in South Africa... is when he receives the necessary sentence.

We have men and women in prison who have killed their spouses who are serving... more than 20 years. Why is Oscar Pistorius an exception in this case? Is it because he has got money?"

'Law must run its course'

Previously a role model for disabled people worldwide, Pistorius was released from jail in 2015 after serving one year of a five-year term for culpable homicide.

He returned behind bars after his conviction for murder, and is being held at a prison in Pretoria.

The year before he killed Steenkamp, Pistorius became the first double-amputee to race at the Olympics when he competed at the London 2012 games.

In a television interview, he said he believed an intruder was in the house and "instant fear" drove him to grab his gun and walk on his stumps towards the bathroom.

"All of a sudden I hear a noise, at the toilet. I presumed it was the toilet door opening and before I knew it, I'd fired four shots," he said.

Outside the court on Friday, June Steenkamp's lawyer Tania Koen said that family were focused on honouring her memory.

"The family believe in the justice system, and they support the state," Koen said. "The law must run its course."

The court reserved judgement until an unspecified later date. 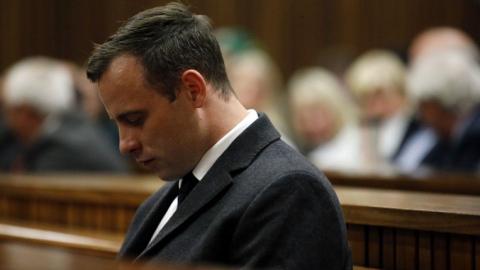