Syrian regime forces took back the town of Al Bukamal near the Iraqi border in Deir Ezzor province for the second time this month, having previously retreated following a Daesh counter-attack.

The regime had declared victory over Daesh in Al Bukamal earlier this month but the militants then staged a counter-attack using sleeper cells hidden in the town.

Driving Daesh from Al Bukamal means only a few villages along the Euphrates and patches of nearby desert, as well as isolated pockets in other parts of the country, remain under Daesh control.

The Syrian regime and its allies “expelled Daesh from its last stronghold on Syrian soil," the Iranian-backed Lebanese militant group Hezbollah reported.

TRT World's Shamim Chowdhury has been following the developments from Turkey's border with Syria.

Most of the forces battling Daesh in Syria and Iraq have said they expect it to go underground and turn to a guerrilla insurgency using sleeper cells and bombings.

Western intelligence agencies have said it will still be able to inspire attacks on civilians around the world.

The British-based Syrian Observatory for Human Rights said on Sunday that most Daesh members withdrew from the town, with fighting continuing in the perimeter of Albu Kamal.

Daesh's area of rule in Syria has crumbled this year under two rival military campaigns.

The US-backed Syrian Democratic Forces (SDF), which is largely comprised of YPG militants, have driven Daesh from much of its territory in the north, including the group’s former self-proclaimed capital Raqqa.

Syrian regime forces and their allies have waged an offensive across central and eastern Syria backed by Russian air and missile power.

The two offensives have mostly avoided conflict with each other through communication between the United States and Russia. However, Syrian regime representatives and Iranian officials have said that Bashar al Assad’s regime in Damascus seeks to regain control over areas held by the SDF. 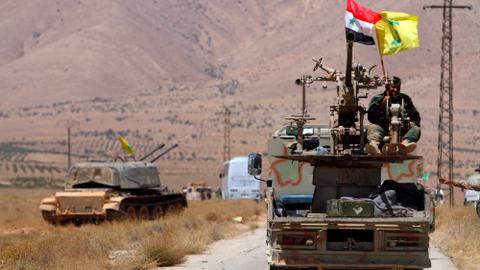