Hudaida is the main entry point for food and aid to a country where eight million people are at risk of starvation.

Forces from an Arab alliance have "freed" the airport in Yemen's main port city of Hudaida, the media office of the Yemeni military allied with the Saudi-led coalition said.

"Army forces backed by the resistance and the Arab alliance freed Hudaida international airport from the grip of the Houthi militia," the media office said on Twitter on Saturday.

It said technical teams were now demining the area.

Capturing Hudaida would give the Saudi-led coalition the upper hand in the war, in which neither side has made much progress since the coalition intervened in 2015 to restore the internationally recognised government in exile.

The port is the main lifeline for food aid to a country where 8.4 million people are facing starvation. Many residents have fled the city.

The United Nations says 22 million Yemenis need humanitarian aid and the number at risk of starvation could more than double to more than 18 million by year-end unless access improves.

Coalition leaders Saudi Arabia and the United Arab Emirates say there are plans to prevent the battle from worsening the humanitarian disaster.

The Houthis, from a Shia minority, deny being Tehran's pawns and say they took power in a popular revolt and are defending Yemen from invasion by its neighbours.

The Western-backed alliance says capturing Hudaida would deprive the Houthis of their main source of income and prevent them from bringing in missiles, dozens of which have been fired at Saudi Arabia.

The United States and other Western powers provide arms and intelligence to the coalition. Human rights groups criticise them over air strikes that have killed hundreds of civilians.

The United States rejected a request from the UAE for intelligence, mine-sweeping and airborne intelligence, surveillance and reconnaissance (ISR) assets for the Hudaida operation, a UAE official said, speaking on condition of anonymity, while noting congressional opposition.

However, the official said France had agreed to provide mine-sweeping support for the operation. 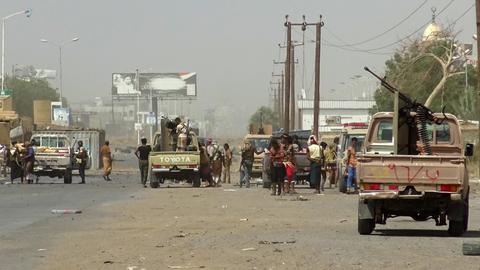 Yemen loyalists push deeper into Hudaida as US cuts support