Aid workers will fly from Jordan's Amman to Yemen's capital, but still no green light to bring humanitarian supply ships to the ports of Hodeidah and Salif.

The Saudi-led coalition fighting in Yemen has given the United Nations permission to resume flights of aid workers to the Houthi-controlled capital on Saturday, but not to dock ships loaded with wheat and medical supplies, a UN spokesman said.

The coalition fighting the armed Houthi movement in Yemen said on Wednesday it would allow aid in through the Red Sea ports of Hodeidah and Salif, as well as UN flights to Sanaa, more than two weeks after blockading the country.

About seven million people face famine in Yemen and their survival is dependent on international assistance.

The coalition has now given clearance for UN flights in and out of Sanaa from Jordan's Amman on Saturday, involving the regular rotation of aid workers, Jens Laerke, spokesman of the UN Office for the Coordination of Humanitarian Affairs (OCHA) said.

"We're of course encouraged by the clearance of this flight which may be followed soon by clearances of flights from Djibouti to Sanaa," Laerke told a news briefing.

No green light for supply ships

But no green light had been received for UN requests to bring humanitarian supply ships to Hodeidah and Salif ports, he said.

"We are particularly talking about one ship which is offshore Hodeidah with wheat from WFP (the UN World Food Programme) and another boat which is waiting in Djibouti with cholera supplies and that is also destined for Hodeidah," he said.

"We stress the critical importance of resuming also commercial imports, in particular fuel supplies for our humanitarian response – transportation and so on – and for water pumping, Laerke said.

17 million women, children & men in #Yemen are facing famine. The clock is ticking, their lives are at stake. Here's how you can help → https://t.co/iqXEsjfbT4 pic.twitter.com/fGvKNpjTam

The US-backed Saudi coalition closed air, land and sea access on November 6 in a move it said was to stop the flow of arms to the Houthis from Iran.

Jan Egeland, a former UN aid chief who now heads the Norwegian Refugee Council, on Thursday said of the blockade: "In my view this is illegal collective punishment."

"After more than two weeks of blockade of these ports, there are various kinds of supplies essential for fighting famine, for fighting cholera and other types of humanitarian threats that millions of people are facing in Yemen today," Laerke said. 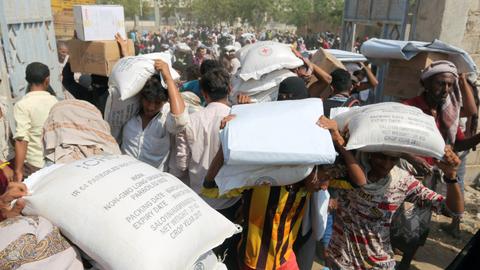 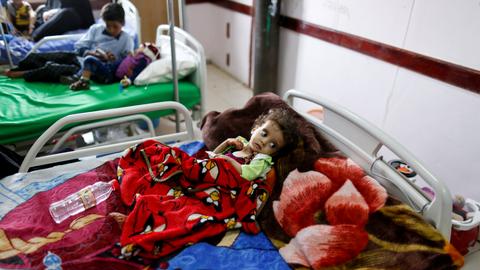