Yemen's war within a war: what does the new fighting mean?

Yemen's prime minister is reportedly preparing to flee to Saudi Arabia. Separatists have seized much of the interim capital Aden in the last few days. Here's a look at what's been happening in the war-ravaged country.

The Saudi coalition that includes the United Arab Emirates as a key ally has been battling rebels in northern Yemen for nearly three years on behalf of President Abd Rabbu Mansour Hadi's government.

However, Yemeni separatists backed by UAE seized the area around the presidential palace on Tuesday. Aden airport has been shut down, schools and shops closed, and families fled districts with the most intense battles.

The violence has killed at least 36 people and wounded 185 since Sunday, according to the International Committee of the Red Cross.

The new split brings more uncertainty and violence in a nearly 3-year-old conflict that has created the world's worst humanitarian crisis. Here is a look at what's happening.

Who is fighting whom?

Despite the Houthis as a common enemy, the UAE and Hadi have been locked in a long-running power struggle, which boiled over on Sunday.

Forces loyal to Hadi have largely been defeated in Aden by a separatist group calling itself the Southern Transitional Council and its forces known as the Security Belt, which was formed, financed and armed by the UAE.

The council is led by Aidarous al Zubaidi, once the governor of Aden who was forced out of his post by Hadi last year. Zubaidi joined forces with southern separatist factions fighting for the coalition. The council advocates secession and a return to the pre-1990 situation when there were two Yemeni states.

Last week, the council gave an ultimatum to Hadi to fire his government over allegations of corruption and incompetence. As the Sunday deadline was expiring, the separatists and Hadi's forces pounded each other using tanks, artillery and machine guns.

In less than three days, the council forces seized control of most of Aden, including the district where the president's Mashiq Palace is located. Members of Hadi's government are preparing to flee, reports suggest the prime minister is one of them.

Why did they turn against each other?

Hadi has been at odds with the UAE for most of the past two years.

The Emirates has taken advantage of the war to seal domination over southern Yemen, taking over oil and gas facilities and ports, setting up militias and creating a network of secret prisons.

Hadi and his aides have complained publicly and privately that the UAE is acting like an occupier. The UAE considers Hadi and his circle as corrupt and incompetent and is angered by Hadi's alliance with the Emirates' nemesis, the Muslim Brotherhood's branch in Yemen, known as the Islah Party.

The AP has reported earlier that Hadi, his sons, and a number of his aides and commanders, now in Riyadh, were banned from returning to Yemen as Saudis put them under virtual house arrest to appease the UAE.

What about the broader civil war?

The fight between the Hadi-coalition alliance and the Iran-backed rebels known as Houthis has been largely stalemated, with some see-sawing of control on the edges of territory but no major breakthroughs.

The Houthis control the north, the capital Sanaa and most of the western Red Sea coast. The coalition and Hadi's forces hold Aden, most of the south and the east (which in the past was part of the separate nation of South Yemen).

Last month, the alliance on the rebel side fell apart as well when fighting erupted between the Houthis and their partner throughout the war, former president Ali Abdullah Saleh.

Saleh was fed up with Houthi monopolising of the north and reached out to ally with Hadi and the coalition. But the Houthis attacked his forces in the capital, defeated them, killed Saleh and arrested hundreds of his loyalists and relatives, leaving the rebels as the sole power.

If the power struggle within the coalition drags on with fighting in Aden or spreads to other cities, the vacuum could allow extremists like al Qaida and Daesh to surge. The void of power could allow the Houthis to advance.

One likely scenario is that Hadi will succumb to UAE pressure, toss out his current government, dump his Islah Party allies and create a new administration filled with UAE-approved figures. That would solidify the Emirates' power but keep Hadi in place.

What Saudi Arabic does next could be decisive, and so far its stance is unclear.

The kingdom says restoring Hadi is its main objective in Yemen but then, the Saudi coalition spokesman avoided condemning the separatists and called on Hadi to "fix flaws" in his government, implying Saudi consent.

It has left more than 10,000 people dead, displaced 2 million people and pushed the impoverished nation of some 28 million people to the verge of famine. A proposal for a long-term solution came from a well-known former Saudi general Anwar Eshki, known to be close to Saudi Arabia's crown prince. On Twitter, Eshki recently called for the formation of self-rule entities in the north and south under federation headed by Hadi. 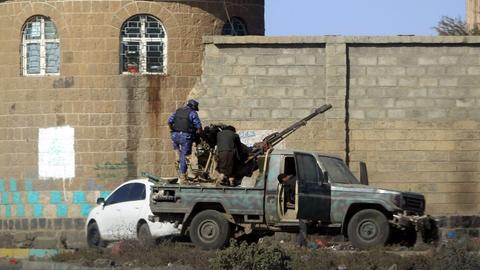