In a video recording, Prince Hamzah says he is under house arrest and had been told to stay at home and not contact anyone and that the country's leaders are a corrupt few who put their interests above the public.

Jordan's official media has warned that security and stability are a "red line", a day after several senior figures were detained and a half-brother of King Abdullah II said he was put under house arrest.

Videos posted online showed a heavy police deployment in the Dabouq area near the royal palaces on the edge of Amman, while former crown prince Hamzah bin Hussein said he was confined to his home.

In a video the BBC said it obtained from his lawyer, Prince Hamzah said several of his friends had been arrested, his security detail removed and his internet and phone lines cut.

Prince Hamzah denied being part of "any conspiracy or nefarious organisation", but said the Hashemite kingdom had "become stymied in corruption, in nepotism, and in misrule" and that nobody was allowed to criticise the authorities.

The official newspaper Al Rai on Sunday warned that Jordan's "security and stability" were a "red line that must not be crossed or even approached", and said an official statement on the events was expected later in the morning.

The pair were detained for "security reasons", Petra said, quoting a security source.

The widow of Jordan's late king defended her son, Prince Hamzah, against allegations by the authorities that he carried out actions targeting "security and stability" in the kingdom.

"Praying that truth and justice will prevail for all the innocent victims of this wicked slander," former Queen Noor wrote on Twitter. "God bless and keep them safe."

Praying that truth and justice will prevail for all the innocent victims of this wicked slander. God bless and keep them safe.

Many countries and groups have reacted saying King Abdullah has their full support.

“We are closely following the reports and in touch with Jordanian officials. King Abdullah is a key partner of the United States, and he has our full support,” US State Department spokesman Ned Price said in an email.

“The kingdom affirms its full support, with all its capabilities, to all decisions and measures taken by King Abdullah and His Highness Prince Al Hussein bin Abdullah II, the Crown Prince, to maintain security and stability,” the Saudi royal court said in a statement.

The Ministry of Presidential Affairs stressed the UAE’s full support for all decisions and measures taken by King Abdullah and his crown prince to maintain Jordan’s security and stability and “to defuse any attempt to impact them.”

Senior Emirati official Anwar Gargash said on Twitter Jordan’s “wise policy to build bridges in a turbulent region was not an easy choice but was, and remains, the necessary direction”.

Egypt voiced support for King Abdullah and his efforts “to maintain the security and stability of the kingdom against any attempts to undermine it,” its presidency spokesman wrote on Facebook.

In a statement, GCC Secretary General Nayef Falah Mubarak al Hajraf said the bloc affirmed its full support for all decisions and measures taken by King Abdullah to preserve the security and stability of Jordan.

“The Iraqi government affirms that it stands with the Hashemite Kingdom of Jordan, under the leadership of His Majesty King Abdullah II, in any steps taken to preserve the security and stability of the country and take care of the interests of the brotherly people of Jordan, in a way that boosts their presence, by relying on measures that aim to extend the respect of the state,” the foreign ministry said in a statement.

Qatar expressed its full solidarity with Jordan and its full support to the decisions and measures issued by King Abdullah to preserve security and stability, and boost the process of progress and prosperity, state news agency QNA said.

It said strategic bilateral relations “will remain an honest and strong guard against any attempts to undermine the security and stability in the two countries and the region.”

Yemen’s internationally recognised government “affirms its absolute support and totally stands with all decisions and measures taken by His Majesty King Abdullah aimed at maintaining security and ending any attempts to destabilise the sisterly Kingdom of Jordan,” state news agency Saba said.

“Palestinian President Mahmoud Abbas said that we stand by the sisterly Hashemite Kingdom of Jordan, the king, the government, and the people,” official Palestinian news agency WAFA said in a statement.

“We support the decisions taken by King Abdullah II to preserve Jordan’s security and ensure its stability and unity.

“We support the steps taken by King Abdullah to maintain Jordanian national security, stressing that Jordan’s security and stability is a supreme Palestinian interest.”

“He also stressed his confidence in the leadership’s wisdom and its keenness to secure the country’s stability in parallel with the respect for the constitution and the law.

“Ahmed Aboul Gheit added that King Abdullah II has a high and appreciated position, whether among the Jordanian people or on the Arab level in general, and that everyone knows his sincerity and his great role in serving Arab causes.”

Hamzah is the eldest son of late King Hussein and his American wife Queen Noor. He has good relations officially with Abdullah, his half-brother, and is a popular figure close to tribal leaders.

Abdullah had appointed Hamzah crown prince in 1999 in line with Hussein's dying wishes, but in 2004 stripped him of the title and gave it to his own eldest son Hussein.

Awadallah, a former finance and planning minister educated in the United States, was close to the king but has also been a controversial figure in Jordan.

He had played a key role pushing for economic reforms in the country before he resigned in 2008 amid criticism over alleged interference in sensitive political and economic issues.

Saturday's security sweep comes as Jordan prepares to mark 100 years since the new kingdom then named Transjordan was established alongside Palestine under British mandate.

It declared independence in 1946.

Despite having little oil wealth and severely lacking water, the kingdom has managed to survive repeated wars in the region which have sent waves of refugees across its borders. 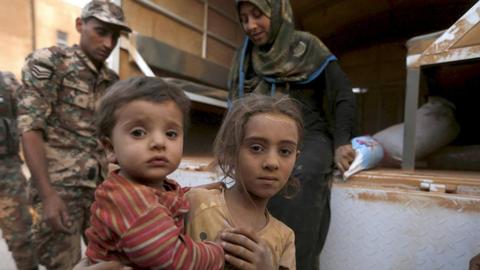