Regime and opposition forces were locked in clashes on Thursday in north-west Syria after an advance by opposition fighters killed 56 combatants overnight, a war monitor said.

"The fighting is ongoing as regime planes and artillery pound the area," the head of the Britain-based Syrian Observatory for Human Rights (SOHR) Rami Abdel Rahman said on Thursday morning.

Russian and regime aircraft ramped up their deadly bombardment of the Idlib region –– home to some three million people –– since late April, despite a months-old international truce deal.

Clashes have also raged on the edges of the region, including in the north of Hama province.

Naji Mustafa, a spokesman for the allied National Liberation Front rebel grouping, said: "The hill is very strategic because it overlooks...supply routes to enemy forces."

More than 550 civilians have been killed in regime and Russian air strikes on north-west Syria since the end of April, according to the Observatory.

Air strikes on Wednesday alone killed 11 civilians, among them four children, including in raids that knocked a hospital out of service, the monitor said.

The United Nations says 25 health facilities in the region have been hit, while the fighting has forced 330,000 people to flee their homes.

A September deal between Russia and Turkey was supposed to avert a massive regime offensive on Idlib, but it was never fully implemented and HTS took full administrative control in January.

Syria's war has killed more than 400,000 people and displaced millions since it started in 2011 with a brutal crackdown on anti-regime protests.

The UN is close to an agreement with the Syrian regime on setting up a constitutional committee, a long-awaited step in a stalled peace process, the UN Syria envoy said on Wednesday.

"I believe we have made very solid progress and we are very close to having agreement on establishing the constitutional committee," Gerd Pedersen told reporters after meeting the regime's foreign minister, Walid al Moualem.

The UN wants to convene the committee as the next step in efforts to find a political solution to end the war in Syria, but there has been no agreement so far on who should be on it.

A Syrian regime statement said significant progress had been made in the talks, but also reiterated its previous stance that the constitutional committee should be a purely Syrian affair.

Pedersen also called for a return to stability in Idlib province, where a regime offensive has targeted the last major rebel stronghold and said a truce there agreed last year between Russia and Turkey should come back into force. 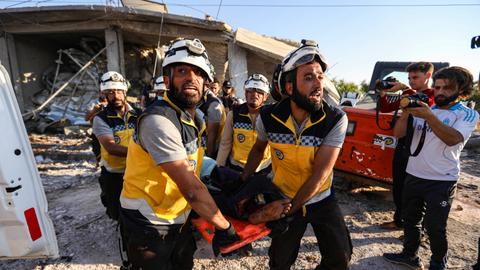