No casualties reported among American forces from attack on Al Tanf base in southwestern Rif Dimashq governorate, US officials say.

A drone attack has targeted a US military base near Syria's border with Iraq, US officials and a war monitor said.

In a statement to Anadolu Agency late on Wednesday, a US official confirmed the attack on the Al Tanf military base in Syria's southwestern Rif Dimashq governorate where US forces are deployed.

There were no casualties among American forces, the official said.

"We know of no casualties," an official said on condition of anonymity to the AFP news agency.

"Explosions resounded from the Al Tanf base used by the US-led coalition" fighting Daesh group, the Britain-based Syrian Observatory for Human Rights said.

According to the monitor, a "drone attack" was responsible for the blasts.

READ MORE: This is how the US can (still) become kingmaker in Syria

The Al Tanf base, a desert garrison, was set up in 2016 as part of the fight against the Daesh group.

The Syrian regime and its allies have repeatedly said US troops had no reason to be there.

Iran-backed forces are deployed in close proximity to the desert outpost, which sits on the strategically significant Baghdad-Damascus highway.

READ MORE: Britain and France say they will leave Syria if the US leaves 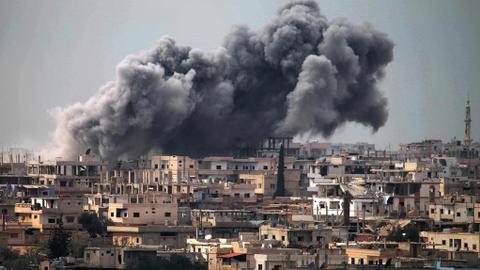