Critics have accused the Saudi Arabia's rulers of "sportswashing" to improve their image after long being condemned over rights abuses.

Saudi Arabia has hosted it first ever women's golf tournament in an event that was designed to soften the kingdom's austere image but has drawn charges of being a "sportswashing" exercise.

With a birdie on the extra hole, Denmark's Emily Pedersen edged out England's Georgia Hall and secured the $150,000 winner's cheque in the inaugural Saudi Ladies International on Sunday at the King Abdullah Economic City close to the western city of Jeddah.

"I'm so happy to be the first winner of this event," Pedersen said in a statement. "It's been such a fantastic experience to be here in Saudi Arabia."

But Amnesty International and other rights groups said the event glossed over Saudi's poor human rights record and the jailing of several women activists who have called for reforms.

The appearance of female golfers, dressed in casual T-shirts and trousers, is a striking anomaly in Saudi Arabia, an ultra-conservative Muslim nation that has long imposed a strict dress code on women.

As part of a sweeping liberalisation drive, de facto ruler Crown Prince Mohammed bin Salman has accelerated investment in glitzy sports and entertainment events in a bid to improve its reputation.

It already hosts the Dakar Rally, a 12-day marathon through the Arabian desert, and the all-electric Formula E series, in addition to an array of boxing, golf and tennis events.

And this month, Saudi Arabia announced it will host a Formula One Grand Prix for the first time in 2021.

The expanded sporting schedule is part of a push to draw more international tourists, business and investment, as the kingdom embarks on reforms designed to lessen its reliance on oil revenues.

But critics have accused the country's rulers of "sportswashing" to improve their image after long being condemned over rights abuses.

Crown Prince #MBS, w/unwavering support from outgoing US Pres. Trump, decided on a clear strategy to improve its tattered reputation due to war crimes in Yemen, state agents' murder of #Khashoggi, & domestic repression- use global celebrity & hosting events to launder its image pic.twitter.com/2qgmzHJAVl

"So, when Hollywood A-listers, international athletes, and other global celebrities take government money to perform in Saudi Arabia while staying silent on the government's atrocious rights record, they are boosting the kingdom's strategy of whitewashing Crown Prince Mohammad bin Salman's abuses."

Alexandra Armas, CEO of the Ladies European Tour, shrugged off the criticism and said that taking the opportunity to bring the game to Saudi was an "easy decision".

"We did discuss it with our members how they would feel about coming to play in Saudi, and it was very accepted," she told AFP.

Maha Haddioui, a Moroccan and the first Arab professional on the Ladies European Tour, said she was thrilled to be playing in the event and to help write "a new page of history in Saudi."

"I got a lot of messages from young Saudi women telling me how does it work if I want to start golf... so just being part of this, for me it's a winning week." 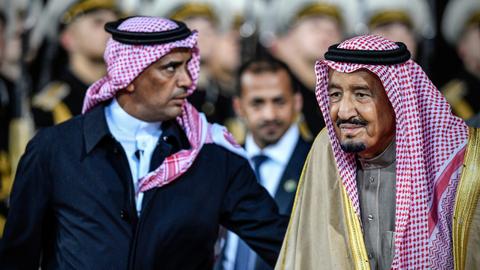