1
Legendary filmmaker Satyajit Ray honoured by retrospective
2
A new type of life habitat in the midst of garbage floating in the ocean
3
Top UAE adviser makes rare trip to Iran
4
Erdogan: Turkey to strengthen relations with all Gulf states
5
Global need for humanitarian aid to 'skyrocket' in 2022

General strike paralyses operations of UN’s cash-strapped Palestinian refugee agency, UNRWA. The agency faces a shortfall of more than $200 million after the US slashed funding earlier this year.

Gaza employees of the UN Palestinian refugee agency on Monday suspended services for a day to protest pay cuts and dismissals.

Schools, clinics, and food distributions were halted as UN's Relief and Works Agency's (or UNRWA) 13,000 Palestinian employees in blockaded Gaza went on a one-day strike.

The protesters threatened "harsher" protests if the agency didn't rescind cuts by Thursday.

"The decision of UNRWA of dismissing its staff is an arbitrary one and has no justification. This decision has widely affected our life," Jaber Thabit , a UNRWA psychological healthcare staff said.

"A large number of people will be jobless. We call on the administration of UNRWA to revoke this unjust decision."

For the past seven decades, the UN agency UNRWA has supported more than five million Palestinian refugees in both Palestine and neighbouring Jordan.

Their plight is about to worsen, because with the US cutting its funding to the agency, UNRWA says a financial shortfall could have far-reaching effects.

The deficit caused 113 emergency programme jobs to be scrapped and 584 staff positions were converted to part-time.

UNRWA provides services to millions of Palestinians and their descendants who fled or were forced from homes in the 1948 war surrounding Israel's creation.

Sami Nasir, another staffer with the UN agency said his contract was changed from full-time to part-time, halving his salary.

US President Donald Trump's decision has left UNRWA trying to cover a $200 million shortfall from Gulf and European donors, and has further strained tensions between Washington and the Palestinian leadership.

Relations have sharply deteriorated since Trump decided to recognise Jerusalem as Israel's capital last year, reversing decades of US policy and prompting Arab warnings that it could fuel crises in the region.

Foreign governments and organisations, with exceptions including Israel, criticised the move. 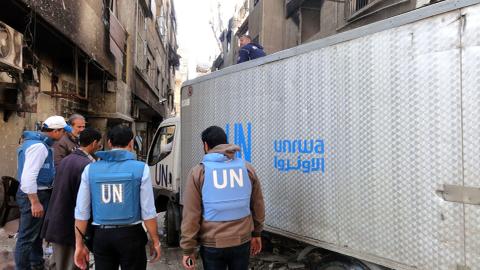 1
Legendary filmmaker Satyajit Ray honoured by retrospective
2
A new type of life habitat in the midst of garbage floating in the ocean
3
Top UAE adviser makes rare trip to Iran
4
Erdogan: Turkey to strengthen relations with all Gulf states
5
Global need for humanitarian aid to 'skyrocket' in 2022