A nuclear technology expert says Riyadh is a year away from completing the building of its first nuclear reactor. A separate report says the kingdom is issuing a multi-billion-dollar tender in 2020 to construct its first two nuclear power reactors.

Saudi Arabia is about a year away from completing the building of its first nuclear reactor, a nuclear technology expert said, citing Google satellite images.

Robert Kelley said the construction so far appears to be very small in size, indicating the reactor is intended for research purposes.

Still, Kelley said before the kingdom can insert nuclear fuel into the reactor, it would have to abide by an agreement that requires inspections by the UN nuclear watchdog, the International Atomic Energy Agency.

Kelley, a veteran of the US Department of Energy now based in Vienna, was first to identify the images of the reactor site in Riyadh at the King Abdulaziz City of Science and Technology [KACST].

He said on Thursday the Saudi reactor is being built by the Argentinian government-owned company INVAP.

The Associated Press could not immediately reach spokespeople at the Energy Ministry or KACST for comment.

Kelley said it’s been surprising to him "how non-transparent" the kingdom has been in the process of building the reactor and "how they seem very cavalier about modifying their arrangements with the IAEA."

The type of reactor being built now, according to the satellite images Kelley identified, is used by technicians for learning and training purposes.

"The reactor’s at the bottom of an open tank filled with water 10 meters (32 feet) high. It’s very, very small," Kelley said, adding that the core of the reactor is about the size of a gallon-sized paint can.

Meanwhile, Riyadh plans to issue a multi-billion-dollar tender in 2020 to construct its first two nuclear power reactors and is discussing the project with US and other potential suppliers, Reuters news agency reported, citing three sources familiar with the plans.

The world's top oil exporter wants to diversify its energy mix, adding nuclear power so it can free up more crude for export.

But the plans are facing Washington's scrutiny because of potential military uses for the technology.

Saudi Arabia, which aims to mine for uranium, says its plans are peaceful.

But Crown Prince Mohammed bin Salman said in 2018 the kingdom would develop nuclear arms if Iran did.

US, Russian, South Korean, Chinese and French firms are in talks with Riyadh to supply reactors, a promising deal for an industry recovering from the 2011 Fukushima nuclear disaster.

"Saudi Arabia is continuing to make very deliberate steps forward although at a slower pace than originally expected," one of the sources familiar with the plans told Reuters.

Saudi officials previously said they aimed to select a vendor in late 2018, which then slipped to 2019. The sources said the tender would now be issued in 2020.

However, Reuters citing sources said the project was proceeding slowly partly because the kingdom was still in discussions with all potential suppliers rather than narrowing them down to a short list.

The plans have also been delayed by strained ties with Washington, which criticised Riyadh after the murder of Saudi journalist Jamal Khashoggi in the kingdom's Istanbul consulate in October, a source familiar with the talks said.

Riyadh needs to sign an accord on the peaceful use of nuclear technology with Washington to secure the transfer of US nuclear equipment and expertise, under the US Atomic Energy Act.

US Energy Secretary Rick Perry said last week that the negotiations which began in 2012 were continuing.

The source said Washington has also been seeking to convince Riyadh to sign the International Atomic Energy Agency's Additional Protocol on extra safeguards for verifying nuclear technology is used for peaceful applications. The kingdom has so far resisted, the source added.

The fate of these negotiations could determine whether Riyadh reaches a deal with US firms, the source said.

Saudi Arabia, which sent a "request for information" (RFI) to nuclear vendors in 2017, is holding workshops with vendors from five nations as part of the pre-tender process, one source said, adding that this was expected to last 12 to 15 months.

The King Abdullah City for Atomic and Renewable Energy (KACARE), tasked with developing the nuclear programme, has brought in an executive from oil giant Saudi Aramco to help manage the pre-tender consultancy process, two sources said.

The Energy Ministry, overseeing the project, and the kingdom's international press office did not respond to Reuters requests for comment.

KACARE has in the past said the kingdom was considering building 17.6 gigawatts of nuclear capacity by 2032, requiring about 16 reactors.

But the sources said the focus for now was on the first two reactors and a potentially smaller programme.

Neighbouring United Arab Emirates is building a nuclear power plant, the first in a Gulf Arab state. Iran, across the Gulf, has a nuclear plant in operation and has been locked in a row over its nuclear ambitions with the United States.

Saudi Arabia, which has long vied with Iran for regional influence, has said it will not sign any deal with the United States that deprives the kingdom of the possibility of enriching uranium or reprocessing spent fuel in the future, both potential paths to a bomb. 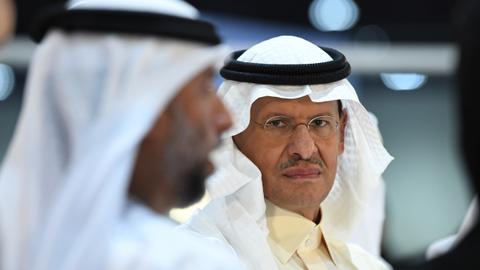